VOTERS have news for Tony Abbott: they’re against some of the tough measures flagged for his government’s first budget.

But eight days out from the budget the prime minister believes “in the long run” voters will accept his measures to reduce debt levels. 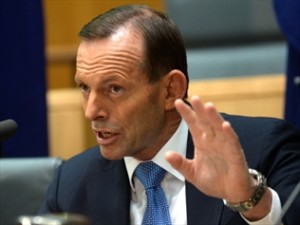 And these may include a deficit levy on higher income earners.

A Network Seven-Reachtel poll, published on Monday evening, shows a majority of voters opposes a 1 per cent levy on those earning more than $80,000.

Business agrees, with the Australian Chamber of Commerce and Industry warning the “ill-advised” levy threatens confidence.

It also predicts the government will dump its levy plan by the time the budget is revealed next Tuesday.

But Mr Abbott says Australia will be “doomed” if a tough budget isn’t handed down and that it faces years of “economic stagnation”.

Labor says new data on services industry performance shows how out of touch the government is.

Shadow treasurer Chris Bowen says the sector is struggling while the government proposes massive budget cuts and tax hikes to deal with a concocted budget emergency.

The Australian Industry Group’s services index fell 0.3 points to 48.6 in April, below the 50 level that separates expansion and contraction.

“There is clearly apprehension in the business community that next week’s budget will stifle economic activity,” AiG chief executive Innes Willox said.

That view is likely to ensure the Reserve Bank of Australia keeps its cash rate steady at a record low of 2.5 per cent on Tuesday.

However, the government has reportedly reassured the mining industry it won’t touch the diesel fuel rebate.

Leaked correspondence between top mining executives warns of a “profound” political impact from cuts to the rebate, greater than Labor faced on the mining tax.

Nationals senator John Williams is confident the rebate will stay.