At least 55 civilian Palestinians, including children, have been killed since Israel began its Gaza ground invasion.

Beit Lahiya, Gaza Strip – The Kamal Adwan hospital in northern Gaza buzzes with activity, as dozens of Palestinians rush in with injuries from artillery fire. Usually, patients feel protected in the hospital, but not on Friday morning, after the news spread that an Israeli tank shell hit a hospital in Beit Hanoun. 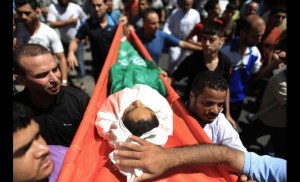 “The moment I see Israeli missiles shelling hospitals, I get more concerned that we are not safe either,” says 57-year-old Abu Iyad, who lives less than one kilometre from the Israeli tanks positioned along the border in Beit Lahiya.

Israel’s military dropped leaflets asking residents to leave their homes on Thursday. The leaflets arrived as Israel launched a ground operation into the besieged Gaza Strip, pushing deeper into the territory at five separate entry points. Israel said the aim of the operation was to destroy tunnels and rocket-launching sites in Gaza.

Israel struck more than 100 separate sites in Gaza overnight on Thursday, in the first hours of its ground operation. It also reported destroying nine underground tunnels and 20 concealed rocket launchers.

So far, Israeli forces have not gone further than two kilometres inside Gaza. But the number of Palestinian civilian casualties has risen, as more than 280 Palestinians have now been killed in 11 days of violence. Another 1,900 Palestinians have been injured, as civilians have borne the brunt of the violence so far.

“It seems neither [Israeli Prime Minister Benjamin] Netanyahu nor [US President Barack] Obama want to know that it’s we civilians who are the targets – resistance is our last resort to gain freedom and breathe some air into our lungs,” Abu Iyad told Al Jazeera.

Late on Friday, constant shelling could be heard across the Gaza Strip, as Israeli F16s struck buildings across the territory, and warships fired missiles from their positions just offshore.

“The [Israeli army] is operating against Hamas and the other terrorist organisations in the Gaza Strip from the sea and air, and now on land as well,” Netanyahu said on Friday afternoon before a special cabinet meeting. “Because it is not possible to deal with the tunnels only from the air, our soldiers are now doing so on the ground,” he said.

Meanwhile, Obama has reaffirmed his support for the Israeli operation, but urged restraint. “No nation should accept rockets being fired into its borders or terrorists tunneling into its territory,” Obama said, according to the Associated Press news agency.

Dr Ashraf al-Qidra of Shifa hospital in Gaza City told Al Jazeera that 55 Palestinians had been killed in the first 24 hours of Israel’s ground operation, including three children from the Abu Musallam family – Ahmed, Walaa and Mohammed.

Eleven-year-old Ahmed’s face was blackened with burns and smoke exposure. Next to him at the Kamal Adwan hospital morgue laid his sister Walaa, 12, and brother Mohammed, 14; they were all wrapped in white burial shrouds.

Ismail Musallam, the children’s father, said they were asleep when an artillery shell hit the family’s apartment in the al-Nahda residential tower. The father started digging the children out from under the rubble alone, before local ambulance crews arrived.

The family’s home was inaccessible for relatives trying to visit the children before burial, as is the norm, and their funeral was also delayed because the family was unable to move for several hours under heavy Israeli fire.

In Khan Younes in southern Gaza, nine people were killed overnight on Thursday, including four members of the Radwan family. Israeli bulldozers were spotted levelling agricultural land in the so-called buffer zonebetween Gaza and Israel.

Al-Wafa hospital has also been under attack , according to Attia al-Wadia, head of public relations at the rehabilitation hospital. “Israel continues to bomb, to force doctors to evacuate,” al-Wadia told Al Jazeera, explaining that hospital staff moved 18 seriously wounded patients to another facility, fearing they would be hit by an Israeli strike.

Finally, after hours of delays, the three children from the Musallam family were buried in a haze-filled cemetery, as black smoke poured out of a nearby building.

The bodies were carried on stretchers by a group of men. Ahmed’s face was covered in black burns, while his brother and sister’s bodies were riddled with shrapnel injuries. Tension was palpable amid the mourners, as they feared another Israeli bombardment.

“They were just asleep in warm beds a few hours ago. Now they are all cold in a morgue, dead,” a family member who did not give Al Jazeera her name said earlier in the day at Kamal Adwan hospital.

“Look, she was just at the age of blooming roses. What threat was she? What did she do to Israel to deserve this?”