The Minister Assisting the Prime Minister for the Centenary of ANZAC, Senator the Hon. Michael Ronaldson, and Parliamentary Secretary to the Treasurer, The Hon. Steven Ciobo MP, today unveiled a new $1 circulating 2014 coin featuring the Centenary of Anzac logo and produced by the Royal Australian Mint. 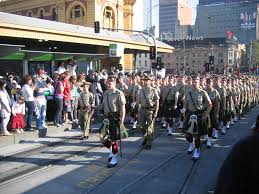 The special commemorative 2014 $1 circulating coin features the official logo of the Anzac Centenary, including the image of an Australian soldier, head bowed and rifle reversed in solemn reflection and the words ‘100 Years of Anzac – The Spirit Lives’. The coin is rimmed with a motif reflecting the sun’s rays as captured on the Australian Army’s Rising Sun badge.

Senator Ronaldson said the Anzac Centenary would be one of the most important commemorations in Australia’s history and it was fitting that the Royal Australian Mint had created this coin.

“The Centenary of Anzac will be one of the most defining moments in our nations’ story and the creation of a coin is a permanent way to reflect on and remember this commemorative period,” Senator Ronaldson said.

“I am delighted that the Mint has chosen to feature the Centenary of Anzac logo on the 2014 circulating coin.”

Mr Ciobo said introducing this coin into circulation would mean that for many years to come these coins would pass through the hands of thousands of Australians.

“Every time someone looks at this coin it will remind them of the service and sacrifice of our past and present Australian Defence Force members. In particular, of those who died in the First World War,” Mr Ciobo said.

Students from St Andrew’s Primary School in Werribee attended the launch and were presented with coins.

Royal Australian Mint CEO, Ross MacDiarmid, said the Mint had a proud tradition of commemorating Australian military history with the production of a coin and the 2014 $1 ‘100 Years of Anzac – The Spirit Lives’ circulating coin would add to that.

“The Anzac Spirit has long been invoked as part of the essence of what it is to be Australian. The Anzac Centenary reminds us all that it is a living spirit and this coin captures aspects of that spirit in a permanent form,” Mr MacDiarmid said.