Leaders of alliance hold talks with Ukraine president in UK, as NATO chief warns of biggest threat since Cold War.

NATO leaders are holding a summit in the UK in a bid to show unity against Russia over the conflict in Ukraine, after France suspended delivery of a warship to Moscow despite a surprise peace plan put forward by the Kremlin. 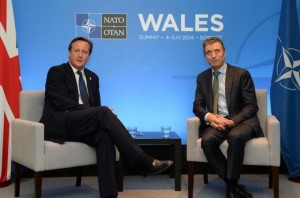 Ukrainian President Petro Poroshenko held talks with US President Barack Obama and other Western leaders on Thursday on the conflict with pro-Russia rebels in Ukraine ahead of the start of a NATO summit.

NATO chief Anders Fogh Rasmussen has warned that Russian intervention in Ukraine is the most serious security threat since the Cold War, one which the 28 member-states ignore at their peril.

US President Barack Obama and British Prime Minister David Cameron vowed to stand together in support of Ukraine against Russia in a joint statement in the Times newspaper on Thursday.

“Russia has ripped up the rulebook with its illegal, self-declared annexation of Crimea and its troops on Ukrainian soil threatening and undermining a sovereign nation state,” the two leaders wrote in an op-ed piece.

“We should support Ukraine’s right to determine its own democratic future and continue our efforts to enhance Ukrainian capabilities.”

Poroshenko and Western leaders are to hold a session of the NATO-Ukraine Council, set up after the country became an alliance partner in 1997, the AFP news agency reported.

The meeting will “send a clear signal of their support for Ukraine’s sovereignty and that the onus is on Russia to de-escalate the situation,” a British government source said.

Reporter, reporting from Newport, said that the discussions will aim to develop a way to fund the enhanced support for Kiev.

“The US is certainly pushing its other NATO partners to increase their defense budgets,” he added.

Russian President Vladimir Putin on Wednesday pre-empted the NATO summit, unveiling a seven-point Ukraine peace plan to produce a ceasefire on Friday, the day when the European Union is expected to announce additional tough economic sanctions against Moscow.

Putin appealed for both sides to lay down their weapons after nearly five months of fighting that has killed 2,600 people and been blamed by both Kiev and its Western allies on Putin’s attempts to seize back former Soviet and Tsarist lands.

However, Ukraine Prime Minister Arseniy Yatsenyuk swiftly rejected Putin’s plan as just the latest “attempt to pull the wool over the eyes of the international community”.

The rebels may also take some convincing to lay down their weapons after scoring a resounding string of successes with the alleged support of Russian soldiers that has seen Ukrainian forces lose effective control over most of the separatist east.

Against this troubled backdrop, the summit center-piece will be approval of a new NATO rapid reaction force comprising “several thousand troops” that can be deployed within “very few days” to meet any new threats, Rasmussen said.

Rasmussen also warned on Thursday that time is pressing for Afghanistan, without a new president since June elections, to sign accords allowing NATO to carry out its post-2014 military training mission.

The accords cover the legal status of US and NATO troops who will remain in Afghanistan after the alliance ends its longest ever combat operation there at the end of this year.