DEPUTY Premier Andrew Stoner says the National Party will demand at least $10 billion in infrastructure funding for the bush, a reduction in power prices and a regional jobs guarantee before agreeing to Premier Mike Baird’s proposed $30 billion sale of the electricity networks or “poles and wires”. 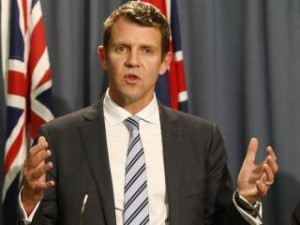 Mr Stoner says at present there is “majority opposition” in the National Party room to any sale of the assets.

He also warned those numbers combined with some Liberals who oppose the sale could see it knocked off were Mr Baird to try to win Coalition approval to take the policy to the next election.

On the weekend, Mr Baird flagged his intention in The Daily Telegraph to take the privatisation of the “poles and wires” to the next election. He also said voters concerned that a sale could drive up power prices should “look at the facts”, saying power prices had gone down in Victoria since privatisation and there would be “assurances” around prices.

Mr Stoner says he will fight for his party room to ensure country people are not disadvantaged by such a sale, particularly by the prospect of a private company fixing the assets less quickly than under public ownership.

before selling the rest, to ensure services were maintained under the standards set under government ownership.

“(There needs to be) if not government ownership, certainly government control by way of regulation,” he said.

“We have got roads in the west where people who export cattle, sheep and goats, when it rains, we can’t get B-doubles and B-triples down them.

“The next item would be price guarantees, if you look at the distance of the lines and number of poles and cost of getting power to a rural business or householder, it’s more.

“We’d be looking for price reductions for country customers who have been paying more than city customers in the past as well as some guarantees around service levels.”

Essential Energy presently had guarantees of the amount of time they would take to come out and service the assets, Mr Stoner said, and he wanted that retained.

Mr Stoner was behind the O’Farrell government decision to sell the ports, which reaped $5 billion, and is keen to continue to accelerate infrastructure spending but knows that a “poles and wires” issue could be used by Nationals MPs to put pressure on his leadership.

Several National Party MPs spoken to by The Daily Telegraph yesterday said they would not entertain the idea of a power sell-off, unless it was endorsed by grassroots members and they had guarantees around jobs and infrastructure.

Dubbo MP Troy Grant said the Liberal Party had to explain “the case for the sale” while Monaro MP John Barilaro, who moved a motion to oppose privatisation at the last NSW Nationals conference, said regional areas were not looked after following the Telstra sale and he would need to know this would not happen again.