Protesters in Kenya decry government’s refusal to hold national talks on security and corruption among other topics. 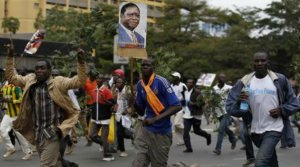 Thousands of people have rallied in Kenya’s capital to criticise what they call President Uhuru Kenyatta’s failure to improve the lives of ordinary people, more than a year after he came to office.

Kenya’s main opposition group, which organised the protest on Monday in Nairobi, hinted it would carry out more mass protests after the government refused to comply with its demands to convene national talks on security, corruption and rising costs of living.

“Today we are telling the president if he is not working he must go,” Senator Bonny Khalwale told those gathered at Nairobi’s central park.

The crowd responded with chants of “Uhuru must go”.

The protesters were met with thousands of government security officers in riot gear, and some businesses and schools did not open for fear of riots.

The rally ended up being mostly peaceful, although at one point police lobbed tear gas at a group of youths who threw stones at officers.

The opposition group, the Coalition for Reforms of Democracy, or CORD, had asked the government to convene national talks by July 7 over a range of topics including security, corruption, and the disbanding of the electoral authority.

The government has said those issues should be discussed in parliament.

CORD also made fresh demands on Monday that the government withdraw Kenyan troops from Somalia.

Kenya has witnessed a notable increase in attacks sincedeploying troops in October 2011 to fight al-Shabab fighters.

The armed group has claimed responsibility for the attacks on the Kenyan coast which killed 65 people last month, as well as an overnight attack Saturday in the same area in which 22 people died.