Pakistan made a new record. Pakistanis are feeling proud. People are clapping, friends are standing with me, family members are watching me live on TV. I was looking at the crowd in disbelief, thinking that was it really me; a world record holder who managed to complete 50544 pushups in 24 hours and also set a record by doing 65 pushups with 40 pound weight in one minute with one hand. 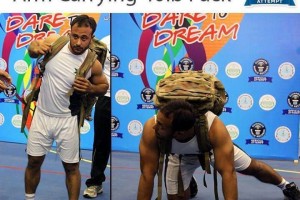 achievement. “How do you feel being a world record holder?” was the first question by them. I could not express my feeling at that time. But how does a man feel after being declared as the best in any of categories at world level; I was standing and trying to find out within me. Thinking…

I was born on 12 April 1991 in village Dowakhri near the town of Gojra (Faisalabad). My father, Mr. Anwar Ul Haq, is an agriculturalist who owns lands in our village. I had my earlier education from Cadet College Kallar Kahar. I excelled both in academics and sports; was member of my college sports team as well as secured first position in the college in the Matric Exams.

Usain Bolt was one of my ideals. When I heard about his world record, somewhere in the corner of my heart, a wish also arose that I might also elevate to world level someday. At that time, I had not thought of making the record that I achieved recently, but that particular wish was start of my journey to the world record.

I was selected for commission in Pak Army in 2009 with 124th Pakistan Military Academy (PMA) Long Course. At PMA also, I was declared Mr. Fittest of my course. After passing out, I was posted to 38 S & T Battalion. I carried on with my physical fitness and regularly participated in PT and sports activities which are part of the military routine.

In 2010, concept of ‘Physical Agility and Combat Efficiency System’ (PACES) was introduced in Pak Army which 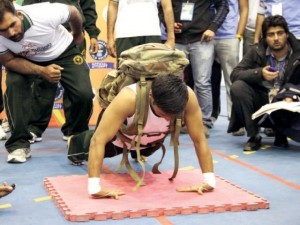 brought fresh wave of competitiveness in physical aspects among soldiers. Although routine in the army keeps men associated with the physical activities throughout the service but PACES is meant to further polish the already polished talent. During the conduct of same competition, my hidden talent surprised me and military authorities alike when I completed 2638 pushups at formation level.

hen I participated in First Army PACES Championship in May 2012 held at Sialkot and secured first position in the whole army by doing 6638 pushups in four hours and 22950 sit-ups in 12 hours. I was also awarded the prize by the then Chief of Army Staff General (Retd) Ashfaq Parvez Kayani who appreciated me and also encouraged me to prepare for the world record. I was honoured by the COAS when he offered me to join his parent unit, 5 Baloch Regiment; that I happily accepted.

Pak Army directed PACES cell to prepare the athletes for world record under a competent team. 27 individuals were selected from whole army and my journey to world record officially commenced. It looked impossible in the start but I kept working hard and didn’t lose heart. Every day was a challenge but we were determined to do it.

During the training, all aspects were kept in consideration. My diet habits were changed, physical fitness routine was polished and I was mentally and physically groomed by Pak Army to become a champion one day. I was not allowed to eat spicy dishes, not even Biryani (my favourite dish). In October 2013, we were asked to pick up the categories for world record. I decided to pick the toughest one: maximum pushups in 24 hours, to show the world that how tough are the soldiers of Pak Army irrespective of their ranks.

For next four months, I had only one thing in my mind: to break the record of 46001 pushups made by Charles Servizio from USA in 1993. During the Punjab Youth Festival held in Lahore, I managed to break his record and include my name in the book. I am not alone in this achievement, as my instructors and coaches deserve full credit for grooming me to reach this level. Their names include: Brig Yousaf Baig who heads the PACES project, Maj Dr Touseef Haider, Hav Habib, Hav Asif, Nk Imran and Nk Amjad. I am also thankful to my family and friends who kept me motivated and helped me in achieving this goal.

Pakistan has no dearth of talent and given opportunities, all are ready to deliver.