A MUSLIM extremist convicted of hacking British soldier Lee Rigby to death on a London street has been ordered to spend the rest of his life behind bars, while his fellow killer was jailed for a minimum of 45 years. 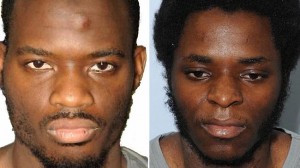 Michael Adebolajo, 29, who received the whole-life term, and Michael Adebowale, 22, were dragged from the dock at the Old Bailey court in London after they started screaming at the judge during the sentencing.

The Muslim converts were found guilty in December of ploughing into Rigby with a car before attacking him with knives and a meat cleaver in broad daylight outside his barracks in Woolwich, southeast London, in May 2013.

Minutes before judge Nigel Sweeney passed sentence, Adebolajo started shouting “Allahu akbar” and Adebowale called out “that’s a lie” in response to claims that they had been radicalised.

They then scuffled with guards before being carried down to the holding cells.

Sweeney said the pair’s behaviour on the Woolwich streets was “sickening and pitiless”.

Wednesday’s sentencing had been delayed for several weeks because the judge wanted clarification on a European ruling that made it uncertain whether whole-life jail terms could still be imposed.

England’s Court of Appeal upheld the right to do so on February 18.