KARACHI: Activists and supporters of the Muttahida Qaumi Movement (MQM) on Thursday protested in Karachi against the ‘enforced disappearances and extra-judicial killings of its party workers. 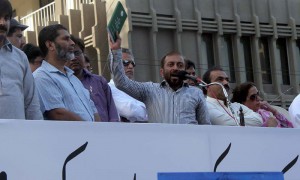 Members of the MQM’s Rabita Committee, lawmakers, and workers of all MQM sector and unit offices in Karachi converged near the Karachi Press club for the demonstration.

A large number of women and children were also present at the protest.

Speaking at the demonstration, party leaders criticised the Protection of Pakistan Ordinance (PPO), declaring it a ‘black law’.

They claimed that personnel of the law-enforcement agencies in plain clothes had been picking up MQM workers and subjecting them to brutal torture. In some cases, they added, the perpetrators killed their workers and dumped their bodies on the outskirts of the city.

MQM leaders appealed to the prime minister, federal interior minister and chief justice of Pakistan to take notice of the security situation in Karachi and to put an end to killing and dumping of its workers’ bodies.