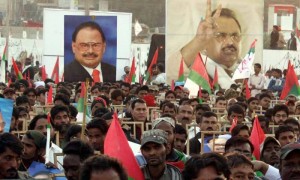 They were shifted to Jinnah Hospital where a large number of MQM leaders and workers had gathered.

Leader of the Opposition in the Sindh Assembly and MQM leader Faisal Sabzwari identified the deceased persons as the party’s workers and said they had been missing for four months.

Activists and supporters of the MQM were holding protests against the ‘enforced disappearances and extra-judicial killings of its party workers.

MQM demonstrators were also holding protests in Karachi and other cities in large numbers. The families of the missing or deceased MQM workers also partook in the demonstrations.

Earlier on Thursday, activists and supporters of the MQM had also protested in Karachi against the ‘enforced disappearances and extra-judicial killings of its party workers.

They had claimed that personnel of the law-enforcement agencies in plain clothes had been picking up MQM workers and subjecting them to brutal torture. In some cases, they added, the perpetrators killed their workers and dumped their bodies on the outskirts of the city.