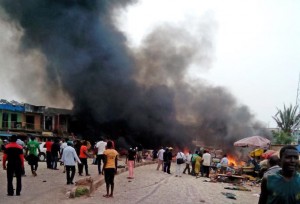 Twin car bombs that exploded at a crowded bus terminal and market in Nigeria’s central city of Jos have killed at least 118 people, the country’s emergency agency said.

Coordinator Mohammed Abdulsalam of the National Emergency Management Agency said fires raged in buildings after Tuesday’s blasts and he expected more bodies to be found.

“We’ve now recovered 118 bodies from the rubble,” he said. “This could rise by morning, as there is still some rubble we haven’t yet shifted.”

The bombs were concealed in a truck and a minibus, officials said. The second blast killed some of the rescue workers who had rushed to the scene, which was obscured by billows of black smoke.

“It’s horrifying, terrible,” said Mark Lipdo of the Stefanos Foundation, a Christian charity based in Jos, who described the sickening smell of burning human flesh.

The latest attack will put even more pressure on the presidency, following a wave of criticism over his government’s handling of the abduction.

“The government remains fully committed to winning the war against terror, and this administration will not be cowed by the atrocities of enemies of human progress and civilisation,” he said in a statement issued by his office.

There was no immediate claim of responsibility for the attack.

“However, suspicion will most likely fall on the group Boko Haram,” he said.

Boko Haram grabbed world headlines with the abduction of more than 200 schoolgirls a month ago from a remote village in the northeast.

Britain, the United States and France have pledged to help rescue them.

Jos has been relatively free of attacks by Boko Haram, but the group claimed responsibility for a bomb in a church in the highland city, as well as two other places, on Christmas Day in 2011.

The city is in the heart of Nigeria’s volatile “Middle Belt”, where its largely Christian south and mostly Muslim north meet. The surrounding Plateau state is often a flashpoint for violence.

“Conflict between Muslims and Christians has been commonplace in the past,” Adow said. “There has also been conflicts between indigenous farming communities and nomads from the north.

“Tension is already high in Jos and police and armed forces are out on the streets to try and stop any reprisal attacks taking place after these bombings.”

Tuesday’s blasts occurred 15 minutes apart in the afternoon, burning several shops to the ground, shattering windows and spreading rubble in the road.

Police sirens wailed as officers rushed to the scene.

“There was a loud bang that shook my whole house. Then smoke was rising,” said Jos resident Veronica Samson. “There were bodies in the streets and people rushing injured to hospital in their cars.”

Boko Haram has stepped up its use of explosives in attacks that are spreading far beyond its core area of operation, including two in Abuja last month.

A suicide car bomber killed five people on a street of bars and restaurants in the northern city of Kano on Sunday evening, in an area mostly inhabited by southern Christians.