Rise of the Robots

Five-foot-tall, 300-pound shiny white robots are now patrolling in front of Building 1 on Microsoft’s Silicon Valley campus. Designed and manufactured by robotics company Knightscope, the presence of these friendly-but-not-too-friendly robots is meant to monitor and secure places such as corporate and college campuses, shopping malls, and schools.

The computerized security guards known as K5 come equipped with a series of sensor features, including high-def, omni-directional video capture that allows for 360-degree monitoring around the entire unit, microphones, thermal imaging, ultrasonic, infrared, radar, and optical character recognition for scanning license plates. They even have sensors that monitor the air quality for “specified particulates,” most likely dangerous chemicals, explains this report. 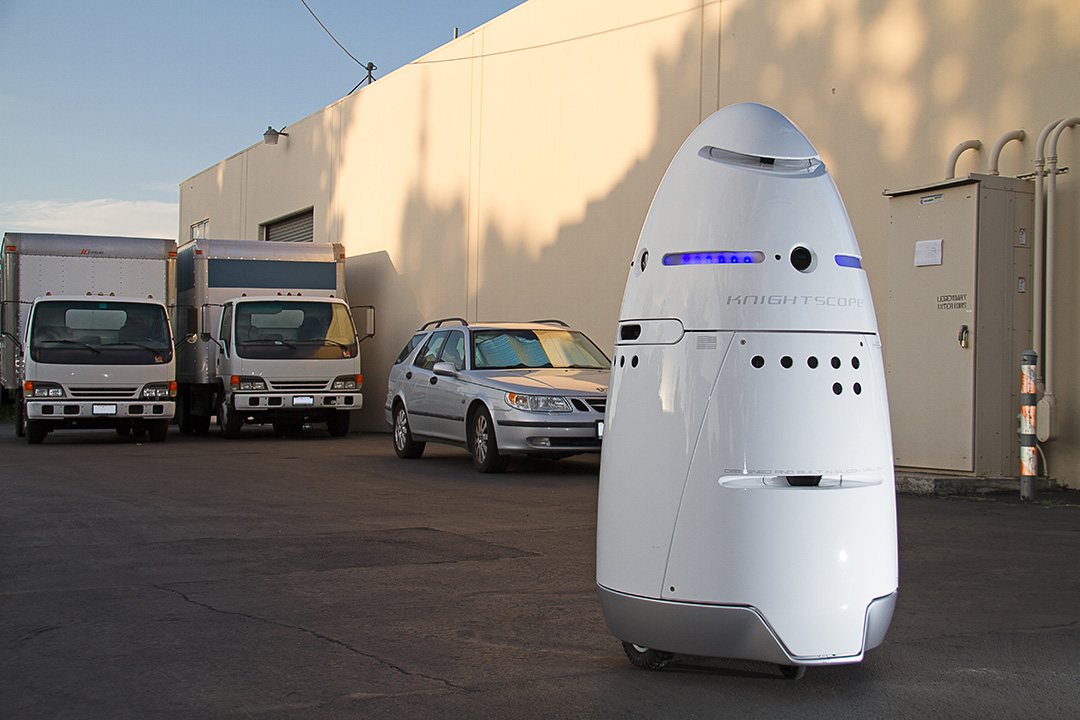 Knightscope, a Silicon Valley-based tech startup in California, has been busy designing, building, and testing the robot, known as the K5, since 2013. Seven have been built so far, and the company plans to deploy four before the end of the year at an as-yet-unnamed technology company in the area. The robots are designed to detect anomalous behavior, such as someone walking through a building at night, and report back to a remote security center. The tech company who refers to their robots as “autonomous data machines” meant to “predict and prevent crime.” They have been working on the K5 prototype since 2013.

Stacy Stephens, Knightscope’s co-founder and vice president of sales and marketing, was quoted in MIT Tech Review saying, “This takes away the monotonous and sometimes dangerous work, and leaves the strategic work to law enforcement or private security, depending on the application.” Knightscope is one of a growing number of companies using robots to help with work traditionally done by humans and/or perhaps replace them altogether.

Science and technology columnist, Matt Stambaugh speaking about the robots are capable of detecting anomalies and making decisions. “It’s not quite as advanced as what Google is doing with their self-driving car, but they’ve got different sensors on board to make a map of the area and then they’ve got code on board to decide what is something that should be reported back. They’ve got thermal imaging if you need. They’ve got chemical sensors, licence plate recognition software [and] facial recognition software,” said Stambaugh.

The latest endeavor by Microsoft indicates that robot security guards may perhaps be seen sooner than imagined. According to a report in the MIT Technology Review, Knightscope hopes to see more of their K5 security units on corporate and even college campuses in the future, including one local, but “as-yet-unnamed technology company.”

According to CBC News, the robots will be hitting the market starting 2015. “What the company Knightscope is trying to do is to lease these out on a per-hour basis,” said Stambaugh. “So $6.25 an hour they’ll lease you one of these K5s and that’s about half the price of the average security guard.”

There are many advantages to a robot over a human patrol, according to the columnist as “They’ll work triple shift, 24 hours a day. The battery is supposed to last around a day and when it runs out they go back to a charging carpet and in 20 minutes they are charged up again.”

Stambaugh also said the robots do not have any weapons, but that may change in the future. “Basically what it’s doing is calling back to a manned response centre if something is going wrong,” he said.