A Malaysian Airways passenger jet destroyed over the Ukraine conflict zone was hit by multiple high-velocity objects and broke up in the air, according to a Dutch interim report into its destruction

Dutch investigators said in the report, released on on Tuesday, that a large number of high-speed objects hit the cockpit area of MH17, leaving multiple holes and leading to the plane’s destruction. 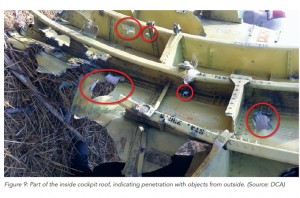 The Boeing 777 exploded while traveling from Amsterdam to Kuala Lumpur, killing all 298 people on board including 193 Dutch citizens.

The West has accused Russian-backed separatists of shooting down the plane with a Moscow-supplied surface-to-air missile. Russia has blamed Ukrainian forces.

According to the report, pieces of aircraft structure were found over a large area – indicating it broke up in the air.

The report said: “The pattern of damage observed in the forward fuselage and cockpit section of the aircraft was not consistent with the damage that would be expected from any known failure mode of the aircraft, its engines or systems.”

The findings also suggested that all crew was properly licensed and had medical certificates. The plane was also in airworthy conditions to make the flight from the Amsterdam Airport Schiphol.

The report also stated that there was no evidence or indication of manipulation of the flight recorders on the plane, adding that no aural alerts or warnings of aircraft system functions were heard in the cockpit.

“The communication between the flight crew and members gave no indication of any malfunction or emergency prior to the occurrence,” Dutch investigators said, adding that engine parameters were consistent with normal operation during the flight.

Washington and Ukraine’s government accused Russian-backed rebels of shooting down the jetliner with an advanced Russian missile system in the mistaken belief it was a Ukrainian military plane.

Russia and the rebels denied the accusation.

Alexander Zakharchenko, prime minister of the self-proclaimed Donetsk People’s Republic reportedly said that pro-Russian rebels do not have the military equipment that could bring down a passenger aircraft.

“I can say only one thing: we just don’t have the [military] equipment which could bring down a passenger Boeing, including this Malaysian plane,” he was quoted as saying by Ukraine’s Inter fax news agency.

Experts did not visit site

The investigators needed to get access to the wreckage in order to get more in-depth findings on the incident.

“They also need to see the satellite images in order to pinpoint the place where a missile, if it is a missile, hit the plane,” Friend said.

The Dutch investigators have been unable to visit the site in the war-torn Donetsk region due to the continued fighting and have relied on information from Ukrainian crash specialists for information from the scene.

Sara Vernooij, OVV spokeswoman, earlier told the AFP news agency: “It is certainly possible to draw meaningful conclusions without having been to the scene.”

Investigators came to their findings based on information from the aircraft’s black boxes, and pictures and video taken at the scene, as well as information supplied by Ukrainian air traffic control.

The “black boxes” have been shipped to Farnborough in Britain to be examined by the Air Accidents Investigation Branch.

The OVV had said the preliminary findings would be “factual information based on sources available to the OVV”.

A full report is not expected until mid-2015, it said.

“We investigate the cause of the accident and not who’s responsible,” Vernooij told AFP.

Shortly after the crash forensic experts traveled to the site to collect body parts, but that search has also been suspended due to heavy fighting in the area.

So far 193 victims of flight MH17 have been identified.