A moment of inspiration from Lionel Messi seals Argentina’s 2-1 win over Bosnia-Herzegovina at the Maracana.

Lionel Messi scored a stunning second-half goal to push Argentina to a 2-1 victory over World Cup debutant Bosnia at the Maracana stadium in the Group F opener for both teams. 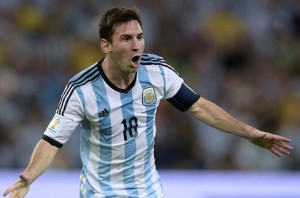 Bosnia got the worst possible start to their first World Cup when Sead Kolasinovic scored an own goal after just three minutes.

Messi sent a free kick from the left flank into the penalty area that Marcos Rojo barely touched before the ball bounced off Kolasinovic’s foot into Bosnia’s goal.

In the second-half Argentina struggled to find ways to create danger as Bosnia gave Messi no space to work his magic.

Izet Hajrovic slipped through Argentina’s five-man defence in the 13th minute but could not beat goalkeeper Sergio Romero.

That shift proved crucial, getting the Barcelona star more involved in the action.

After a string of dangerous runs, Messi combined with Higuain, pulled left along the penalty area, scored with a precision strike off the post.

Messi leaped over defender Ermin Bicakic without losing speed and balance before he took the shot.

It was just the second World Cup goal for Messi, adding to one he scored eight years ago in Germany.

Second-half substitute Ibisevic put some nerve back in the match when he picked up a pass from Senad Lulic and slotted the ball between Romero’s legs.