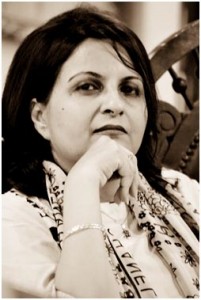 They are married. When She says NO. And He forces. It is Marital Rape. Every woman has a right to take a decision about her body, to decide if she wants to exercise birth control, get pregnant and when NOT to have sex. Physical coercion alone is not rape. What about implied or actual physical threats?

However, accepting undesired sexual advances from the husband is not taken as anything wrong, illegitimate or worth complaining about in Pakistan’s culture. It is a wife’s duty to submit to him whether or not she desires sex herself. When sexual abuse takes place in a marriage, neither the husband nor the wife recognizes it as rape- as stated in law. Since a contract is in place, it lends legitimacy to sexual abuse. Sex-on-demand-and-when-desired is deemed to be an unwritten part of the contract.

The wife feels it is her duty to oblige the husband. She does not believe that it is her right to deny yielding to his physical needs, in most cases. Interestingly, if no physical violence is involved, she will usually never translate it into rape. Or, even when it is. In a society where women are unaware of their right to divorce their husband in the same manner a husband divorces a wife; by both parties acknowledging the right and agreeing to it on the contract of marriage, how can one expect her to be aware of the right over her own body? This is true for most women irrespective of their socio-economic positions.

The Hadood Ordinance enacted under the Shari’a Law in 1979 lays down law/punishment for zina. This is defined as, ‘A man and a woman are said to commit ‘Zina’ if they willfully have sexual intercourse without being married to each other.’
This law deals with extra marital relationships or one contacted between unmarried persons or one married and one unmarried person.

The other law is the Women Protection Bill passed in 2006. This bill enabled courts to try rape cases in the criminal court instead of Islamic court. This bill enabled also, doing away the need to do have multiple male witnesses to the act of rape.

Unfortunately, marital rape has continued to be excluded from the definition of rape-even if it may be in the form of a separate law altogether. Pakistan is heavily recognizable of conjugal rights within the marriage institution-but completely overlooks the proviso to protect the spouses, more especially women from being abused in a relationship. Marital rape is intrinsically tied in with respect of women. In societies where women are generally considered ‘inferior’, their desires, grievances and abuses are brushed aside. Arranged marriages with the spouses may not know each other from Adam until they get married, often takes place, but consummation of marriage more likely than not takes place on the first night of the wedding.

In a report published in Express Tribune, March 9, 2011, Dr Shamsa Humayun, a gynecologist said that patients don’t complain of sexual abuse from their spouses even when the evidence is overwhelming. “I have examined women with severe vaginal tearing, enough that they needed stitches, but they still never admitted they were assaulted,” she said.
Since the abuse takes place in a relationship of trust-the psychological scars are deeper as repeated abuses may take place. Out of unawareness of rights and a shame that may spring from keeping the real face of relationship hidden from outsiders the victims may suffer months and years of criminal behavior without bringing it to light. Hardly ever, do cases get reported. There may also be fear of repercussions involved in a continuing relationship. The problems in prosecuting marital rape has more to do with social attitudes and the very nature of the crime, since an absence of consent has to be proved, coupled with the accused being aware of/ or at least suspecting that said consent was absent, a difficult burden to discharge when confronted with a situation where intimate relations are to be expected, and all elements of the crime must be proved beyond reasonable doubt.

If she does not seek divorce and bring the husband to justice, what is her future? She has to deal with saving herself from an abusive relationship and handle emotional wreckage. What if she cannot prove the charges against the spouse? Does it lead to worse abuse resulting from shaming him and his family publically?

In Pakistani society, generally speaking, a woman is completely forbidden culturally to address a sexual issue in public. A woman who rebels against the cultural norms may be severely punished for it in form of beatings by the spouse, or being sent back to her parents’ house if they are alive. Or the brother if they have passed away. In a society where great emphasis is placed on keeping a marriage together- this can be a frightening proposition! The financial strength of the wife and/or her parents/brother will play a major role in seeking independence.

In a country beset with low literacy, sex treated as a taboo subject; educating masses may be an uphill task. Even in cases where children go to school, sex education is not a part of teaching. The parents usually assume that somehow, once old enough the children would know themselves of the dos and don’ts. A fallacy!

Whereas we recognize ‘regular’ rape as a crime-that of a young girl in a moving bus in India created a furor, leading to worldwide shock, horror and condemnation; that committed in the institution of marriage; alas; goes unacknowledged.
How long shall we continue refusing to acknowledge this act? It is after all 2013.

The writer is Author of, ‘A Comparative Analysis of Media & Media Laws in Pakistan.’