Soldiers kill 22 people at a warehouse in the town of Tlatlaya after coming under fire.

Soldiers in Mexico have killed 22 people at a warehouse in a shootout that also left a soldier injured, the Defence Department has said. 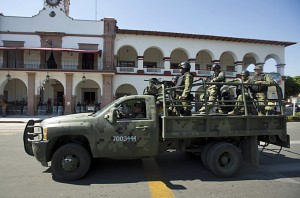 The department said in a brief statement on Monday that soldiers were patrolling the town of Tlatlaya when they came across a warehouse being guarded by armed men, who opened fire on the troops.

Twenty-one men and one woman were killed in the shootout and soldiers rescued three women who said they had been kidnapped, it said.

The town of Tlatlaya is in the mountains near the state of Guerrero, an area known for growing marijuana.

Mexico state, which rings Mexico City, in recent months has seen an increase in killings linked to drug cartels.

Mexican media reported that it was a synthetic drug lab run by the La Familia Michoacana cartel. However, the military did not say if those killed were members of an organised crime group.