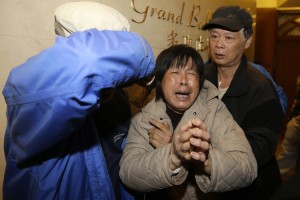 Analysis of satellite information from British company Inmarsat had shown that the Boeing 777’s last position was in the Indian Ocean west of Perth, Australia, Najib said in a statement. “This is a remote location, far from any possible landing sites,” he said. “It is therefore, with deep sadness and regret, that I must inform you that, according to this new data, Flight MH370 ended in the southern Indian Ocean.”
He added that the families of the passengers and crew had been informed. “For them, the past few weeks have been heart-breaking. I know this news must be harder still,” he said. Relatives of those on board received the news in a Malaysia Airlines SMS message which said: “We have to assume beyond all reasonable doubt that MH370 has been lost and none of those on board survived.” After the message, there were hysterical scenes at the Beijing hotel where many of the relatives of those on board are staying.