Incumbent Joyce Banda, who has seen her popularity wane after she imposed austerity measures, faces 10 other candidates. 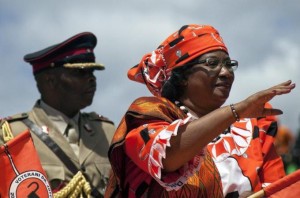 Malawians have started voting in an election in which 11 candidates are vying to unseat President Joyce Banda, southern Africa’s first female head of state, who came to power two years ago.

There were chaotic scenes at some polling stations in the capital, Lilongwe, and the commercial hub of Blantyre on Tuesday, as voting materials failed to arrive or ballot papers were sent to the wrong end of the country.

Reported from Blantyre, said that many polling stations did not open on time on Tuesday and there had been multiple reports of rigging across the city.

“Many people are growing frustrated in the queues and with the voting process so far,” Mutasa said.

Many of Banda’s rivals have already cried foul, saying they have unearthed plots to rig the ballot, although diplomats say
they have seen no credible evidence of vote-rigging.

“The electoral commission has, overall and up to now, done a fair job. They have made, and they probably will make, mistakes – but that doesn’t mean that there is rigging or manipulation.”

First time voter, Enock Manda, 22, from the Chilomoni township in Blantyre, told media that the process went smoothly for him in his district.

“I was nervous but also happy to vote because I had a chance to say whom I want to lead us. And it only took me 10 minutes,” he said.

The only two opinion polls published have had very different results, but most analysts rank Banda as favourite in Tuesday’s vote, pointing to her popularity in rural areas where the government has been rolling out development projects and farm subsidy schemes.

But Banda, who grew up in a village in southern Malawi, saw her popularity wane after she imposed austerity measures including the kwacha devaluation to stabilise the economy.

More recently, Banda’s reputation for probity has been hit by a $15m corruption scandal, dubbed “Cashgate” after the discovery of large amounts of money in the car of a senior government official, that has soured relations with donors.

More than 80 people have been arrested and a former cabinet minister has been dismissed and put on trial for money laundering and attempted murder.

Urban voters in particular have criticised Banda’s response as ponderous and ineffectual.

Seventy-four percent of the country’s 17-million population lives on less than $1.25 a day.

Banda’s main challenge is from Lazarus Chakwera, a conservative evangelical pastor who retired from the church last year to take the helm of the Malawi Congress Party, the former British colony’s first ruling party.

Mutharika’s younger brother Peter is also running as the head of the Democratic Progressive Party, as is Atupele Muluzi, a son of former president Bakili Muluzi.

Polls are schedule to close at 16:00GMT and results are expected on Wednesday or early Thursday.

Church groups fear outbreaks of violence in the normally peaceful country if Banda wins, while opposition parties may continue to pursue claims of vote fraud.