The British hospital treating Malala Yousufzai, the Pakistani schoolgirl shot by the Taliban for campaigning for girls’ education, said Friday that she has been temporarily discharged ahead of surgery. 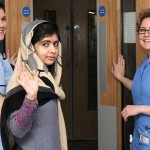 Queen Elizabeth Hospital in Birmingham, central England, said the 15-year-old would stay at her family’s temporary English home before undergoing major surgery on her skull in a few weeks.“Malala Yousufzai was discharged from Queen Elizabeth Hospital Birmingham (QEHB) as an inpatient yesterday (3 January 2012) to continue her rehabilitation at her family’s temporary home in the West Midlands,” its statement said.

“The 15-year-old, who was shot by the Taliban for campaigning for girls’ education, is well enough to be treated by the hospital as an outpatient for the next few weeks.”

Malala was shot on her school bus by a Taliban hitman in October, in an attack that shocked the world.

The bullet grazed her brain coming within centimetres of killing her, and she was airlifted to the specialist Queen Elizabeth Hospital days after the attack in Mingora in Pakistan’s northwestern Swat Valley.

“She is still due to be re-admitted in late January or early February to undergo cranial reconstructive surgery as part of her long-term recovery and in the meantime she will visit the hospital regularly to attend clinical appointments,” the hospital said.

It added that Malala had been regularly leaving the hospital over the past couple of weeks to visit her family at home.

“Following discussions with Malala and her medical team, we decided that she would benefit from being at home with her parents and two brothers,” the hospital’s medical director Dave Rosser said.

He added that medics would be visiting Malala at home ahead of her return to hospital for surgery.

“Malala is a strong young woman and has worked hard with the people caring for her to make excellent progress in her recovery,” Rosser said.

Malala’s father Ziauddin Yousafzai is to become Pakistan’s education attache at its consulate in Birmingham, it emerged on Wednesday.

His daughter first rose to prominence with a blog for the BBC’s Urdu service charting her life in Swat under the Taliban, whose two-year reign of terror there supposedly came to an end with an army operation in 2009.

Her attempted murder has sparked calls for her to be awarded the Nobel Peace Prize, while the United Nations announced a global “Malala Day” in November in support of her campaign for girls’ education.