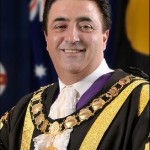 than 3,000 public service jobs to Parramatta and Western Sydney, saying it would further boost economic growth and bring jobs closer to where workers live.

“This is great news for Parramatta as it will further cement our status as the capital of western Sydney and an economic powerhouse at the geographical heart of Sydney,” he said.

“More than 50,000 people already work in the Parramatta CBD and our Council is planning for the infrastructure and services to support thousands more.

“The Premier’s decision is part of a trend in recent years that has seen State agencies such as Sydney Water and the Department of Attorney-General and Justice move to Parramatta.

“We are delighted that we will soon welcome to Parramatta other departments including the Ambulance Service of NSW, the Office of Environment and Heritage, the Environment Protection Authority and the Office of State Revenue. This is great for local businesses and the continuing growth of Parramatta.

“Earlier this month, a major report by PwC Australia showed economic growth in Parramatta is higher than in Sydney’s CBD. We now have 1.6 per cent growth compared to the Sydney CBD’s 1.1 per cent.

“More than 3,000 new public service jobs put us in a solid position to further build on this success. It’s also a strong vote of confidence in the pro-growth vision our Council has developed in recent years.”

“Our proposal for a Western Sydney Light Rail Network – which has attracted support from the State Government – will make it easier for Parramatta-based workers to commute from other locations including The Hills and Ryde regions. I am also encouraged by the Premier’s move to seek expressions of interest for new office space in Parramatta.

“Our Council has already done a lot of work to attract more office space to our CBD along with major residential developments. This makes it easy for people to live within walking distance of their jobs.

“Another recent survey ranked Parramatta as the most liveable place in NSW. It means that while Parramatta is booming as a business and employment hub, it also tops the State as a great place to live.”