KARACHI: London police has asked for names of three people who will be allowed to meet with arrested Muttahida Qaumi Movement (MQM) chief Altaf Hussain. 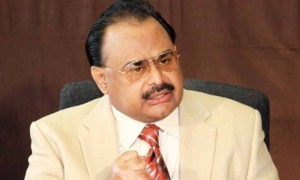 The names can be of people who are either related to Hussain or are his friends.

The development came hours after MQM leader Wasay Jalil claimed that although the London police wanted to question Hussain in relation to money laundering, he had been moved to a hospital on account of ill health.

Doctors will carry out a number of tests on Hussain, Jalil had alleged that after those, the police was likely to decide on how to proceed.

Jalil further said that the MQM was in cooperation with the British police over its investigations in matters relating to alleged money laundering and the murder of Imran Farooq.

Hussain’s residence was sealed after the search of his London home was concluded by the British police.

The search was carried out by 40 personnel of the police, including members of the forensic team.

Police moreover said that the residence will be handed over to the MQM chief after he gets bail.

The two assured Ebad of the federal government’s full cooperation on the matter relating to Hussain’s arrest and his ill health.

The premier said Hussain was a Pakistani citizen, adding that the government would do everything in its power to safeguard the MQM chief’s ineterests.

Hussain was arrested by the British police on Tuesday on suspicion of money-laundering.

He was arrested in northwest London where he has been living in self-imposed exile since 1992.

Police in Britain do not name suspects until they are charged. But when asked about Hussain, the Metropolitan Police said a 60-year-old man had been detained at a residence in northwest London on Tuesday morning.

Hussain gained British citizenship in 2002 after leaving Pakistan when a military operation was launched to end ethnic unrest in Karachi.

His residence in London was previously raided on suspicion of money-laundering in 2012 and 2013 by British police.