Both sides claim the indefinite truce as a “victory”, but Netanyahu faces criticism in Israel over the offensive.

An open-ended ceasefire in the Gaza war was holding as Prime Minister Benjamin Netanyahu faced strong criticism in Israel over a costly conflict with Palestinian fighters in which no clear victor emerged.

On the streets of the battered, Hamas-run Palestinian enclave, people headed to shops and banks, trying to resume the normal pace of life after seven weeks of fighting. 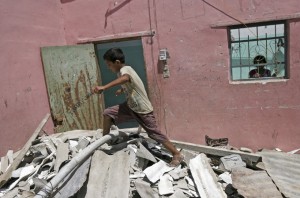 Thousands of others, who had fled the battles and sheltered with relatives or in schools, returned home, where some found only rubble, Reuters news agency reported.

The agreement, which went into force at 1600 GMT on Tuesday, saw the warring sides agree to a “permanent” ceasefire which Israel said would not be limited by time, in a move hailed by the United States, the United Nations and top world diplomats.

Both Israel and Hamas hailed the ceasefire as a victory, while experts said the two sides had agreed to halt their fire out of exhaustion after seven weeks of fighting, which has claimed the lives of 2,143 Palestinians and 70 on the Israeli side. Six of those are soldiers.

“After 50 days of fighting, the two sides were exhausted so that’s why they reached a ceasefire,” Middle East expert Eyal Zisser told AFP.

Politically, Hamas had “not achieved anything” but to really weaken it, Israel would have to resume peace talks with the Western-backed Palestinian Authority, he said.

Under the deal, Israel will ease restrictions on the entry of goods, humanitarian aid and construction materials into Gaza, and it expanded the offshore area open to Palestinian fishermen to six nautical miles.

As sirens warning of incoming rocket fire from the Gaza Strip fell silent in Israel, media commentators, echoing attacks by members of Netanyahu’s governing coalition, voiced deep disappointment over his leadership during the most prolonged bout of Israeli-Palestinian violence in a decade.

“After 50 days of warfare in which a terror organization killed dozens of soldiers and civilians, destroyed the daily routine [and] placed the country in a state of economic distress … we could have expected much more than an announcement of a ceasefire,” Reuters reported analyst Shimon Shiffer as writing in Yedioth Ahronoth, Israel’s biggest-selling newspaper.

“We could have expected the prime minister to go to the President’s Residence and inform him of his decision to resign his post.”

Netanyahu, who has faced constant sniping in his cabinet from right-wing ministers demanding military action to topple Hamas, made no immediate comment on the truce.

Palestinian health officials say 2,139 people, most of them civilians, including more than 490 children, have been killed in the enclave since July 8, when Israel launched an offensive with the declared aim of ending rocket salvos.