Sydney ( Press Release): The Current Government of Pakistan through a special tribunal court indicted high treason case against the former President of Pakistan retired General Pervez Musharraf. He has served the country for 45 years as a loyal soldier 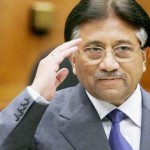 of Pakistan and 9 years as a strong leader of Pakistan being the President.

Pervez Musharraf dealt with the international powers in difficult times of Pakistan, rescued the country and made a stronger economy, technology and defense. He stood up audaciously and fearlessly with the international community in the war against terrorism. He survived the attacks from the Taliban who time and again wanted to assassinate him. Now, it is the time for the international community and patriotic Pakistanis to provide him justice. President Musharraf has been put on exit control list by the present government of Pakistan. 95 years old mother of Musharraf is fighting for her life in UAE’s hospital and Musharraf is not being given permission to see her mother, this is a humiliation of international human rights.

Therefore, we need to stand-up and raise our voice in order to pressurize the government of Pakistan to withdraw all the fake cases against him and let him free as a respectable citizen because Musharraf is not a traitor but a loyalist Pakistani.

In this regard, a demonstration is being held by the active members of the civil society on Sunday 6 April, near Town Hall Sydney at 10.00am. Bring your family and friends in this demonstration.