With no end in sight for Syria’s war, a new camp was set up to accommodate the increasing numbers of Syrian refugees. 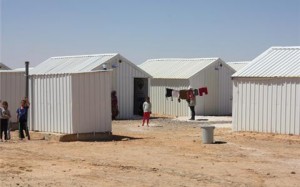 Azraq refugee camp, Jordan – A group of Syrian children flock out and clap as a bus carrying journalists drives around Azraq camp, where thousands of white shelters looking like cottages made of lego pieces, line up neatly row upon row.

Azraq camp, which was officially opened by Jordanian authorities and UN agencies on Wednesday, and located 100km east of the capital, is Jordan’s sixth camp for Syrian refugees.

Extending over 15sq km, the camp is ready to host 25,000 refugees and has infrastructure in place to accommodate up to 51,000 more. Since Monday, only 470 refugees have moved in, making the camp look like a ghost town. But aid workers say it could be soon Jordan’s second largest camp after Zaatari.

Preparation work and planning began a year ago for the camp, which was built at the cost of $45m.

Aid workers and authorities hope that by planning well for the camp, they will avoid the pitfalls of the Zaatari camp, which was built in a rush amid an unprecedented influx of Syrians in 2012. Zaatari camp has become notorious for its harsh living conditions, poor infrastructure and security challenges, which often lead to violent protests and riots.

“We did our best to speak with the local community in Zaatari to understand what works for refugees,” Bernadette Castel, who will be managing the Azraq camp on behalf of UNHCR, told Al Jazeera.

With strong security measures already in place, good quality shelters and decentralised services, aid workers say the Azraq desert could be a more bearable place to live for refugees who fled bloodshed.