Amman, Jordan – The Jordanian parliament’s recent decision to grant the monarchy the power to appoint the country’s top military and security service officials has raised fears in Jordan that King Abdullah II is taking on unprecendented powers. 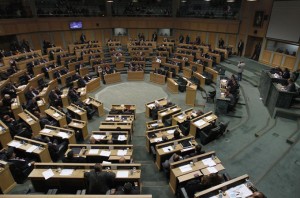 On Sunday, the Jordanian parliament approved an amendment by an overwhelming majority – 118 out of 150 MPs backed the move – to give the King the sole authority to appoint the head of the armed forces and the General Intelligence Department.

“These amendments take away authority from [the] people and pass it on to the King, who is pardoned from any responsibilities,” Mohammad Hammouri, a constitutional law expert and former minister of justice. “The Jordanian constitution is based on the idea that the people are the source of authority, while the throne and power remain separate.”

Article 40 of the Jordanian Constitution gives the King powers by Royal Decree, which is signed by both the prime minister and the relevant ministers.

Prior to the amendment, leaders of Jordan’s army and Intelligence agency were appointed by royal decree after being nominated by the prime minister. But the amendment to the constitution now reads: “Despite what Article 40 of the constitution says, the King appoints the chairman of the army’s Joint Chiefs-of-Staff and the General Intelligence Department director and [the King] ends their services and accepts their resignations.”

On August 12, King Abdullah II sent a letter to Prime Minister Abdullah Ensour ordering the government to reinstate the ministry of defense, a body which had been absorbed into the prime minister’s office in 1970.

The King asked that the ministry be responsible over non-military logistics, administration, investments, and development, which would allow the army to “devote itself to its military and professional duties”. A royal decree on August 13 ordered the Senate to meet and discuss the amendment, which the prime minister then backed. The change was approved 11 days later.

The government has argued that the transfer of powers would pave the way towards a parliamentary government, which the King promised in a speech in June 2011, after protesters – inspired by the uprisings across the Arab world that year – demanded reforms and an end to corruption.

The government said this latest amendment would also shield the army from potential politicization when a parliamentarian government is formed. “It has long been an established value in Jordan that the armed forces and security agencies be neutral to politics,” said Mohammad al-Momani, the government’s spokesperson, defending the amendment.

The amendment is important given the turmoil across the Middle East, according to MP Khlood Khatatbah, who voted in favor of it in parliament. “You know we are right in the middle of the fire circle with all that is going on in Palestine, Syria and Iraq,” said Khatatbah.

“In reality, nothing has changed because the King is [already] the one who appoints leaders of the army, and the procedure before the amendment is only formal.”

Others agreed that the change was only superficial. “This is all formal. Sometimes the King chooses somebody beforehand and if the prime minister nominates someone the King did not want to appoint, it will not happen,” Ali Sneed, a member of parliament.

Government spokesperson Momani added that the amendment “paves the way forward towards a parliamentarian government led by a political party’s majority”, and that military and security leaders appointed by the King would still be held accountable by their superiors and by the government’s legislative branches.

But not everyone was convinced. “There is a lack of transparency here. What is alarming is the sense of urgency amid a lack of public debate in the local media. People have the right to know why [the change],” said Rana Sabbagh, a Jordanian journalist and commentator.

“If such amendments are really to protect the army from politicisation and pave the way to a parliamentarian government, then it is a step forward, but if it is only a matter of giving more authority to the King, then it is a step backward,” Sabbagh told Local media.

Parliament member Tamer Benno, one of only eight to vote against the amendment, was skeptical of the government’s motives. “If they [government] were honest in what they say, they would have made changes to increase the authorities of the parliament by allowing [it] to form a government to balance the King’s power.”

MP Sneed said that the decision could have negative effects on freedom in Jordan. “These are not the amendments we were expecting at this time [when] the Jordanian people have been demanding reform and transparency,” Sneed told local media.

“In the past, some leaders of intelligence agencies were charged with corruption,” Sneed added, referring to Mohammad Dahabi, who is serving a 13-year prison sentence for embezzling funds, money laundering, and abuse of office while acting as head the of intelligence department between 2005-2008. “But now the King appoints them, [and he] is pardoned from questioning according to the constitution, so who would be held accountable if such [corruption] cases re-occur?”

The move has also angered retired army generals, who issued a statement rejecting the amendment, while the Jordanian Democratic Popular Unity Party said it affirmed “the government’s police-led approach to deal with political parties and its on-going fear of political pluralism”.

Meanwhile, Jordan’s branch of the Muslim Brotherhood, the biggest and most organized opposition group in the country, did not state its position “due to limited information and vagueness in passing on the amendments”, member Zaki Bani Irshid said in a statement.

Among regular Jordanians, opinions were divided about the change.

Some, like Mohammad Salameh, said the amendment would protect the country’s stability. “I trust that the King knows what is best for his people,” said the 70-year-old retired engineer. “The whole region has become unpredictable. I cannot believe the Islamic State [group] has just arrived on the border.”

Others, meanwhile, were skeptical. “This is definitely a step backward in the progress towards reforms they promise us. It’s as if we are moving towards dictatorship, not a real democracy,” Abdullah, a 35-year-old school teacher in Amman, who didn’t give his last name.

“Prices increase every day, more people seem to be out of work, and after all [that], freedom has been restricted,” he added. “We should be loosening the grip, not tightening it.”