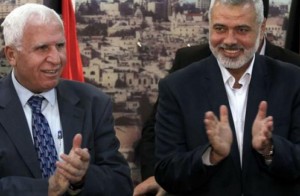 “Through good intentions, mutual concessions and calculated steps we will reach national unity,” Ensour stated.   The Jordanian premier said the Palestinian issue “remains one of Jordan’s top priorities along with the issue of Jerusalem (al-Quds).”

On April 23, Hamas and the Palestinian Authority, pledged to end differences and form a unity government.

Under the long-awaited deal, the rival Palestinian factions of Hamas and Fatah are to form a unity government within five weeks and hold national elections six months later.

The Israeli regime has reacted by canceling the so-called peace talks with the Palestinian Authority and threatening sanctions against it.

In a Thursday interview with Fox News, Israeli Prime Minister Benjamin Netanyahu described the unity deal as a “blow to Israel” and said the pact is “killing” the talks between Tel Aviv and the Palestinian Authority.

Chief Palestinian negotiator Saeb Erekat has also said that the deal is an internal affair and the Israeli regime has no right to interfere in the issue.

The Palestinian Authority will look into “all options” in response to Tel Aviv’s decision for sanctions, Erekat stated.