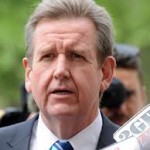 8,020 square metre ICT data centre at Erskine Park in the Western Sydney Employment Hub – a major boost for jobs in the region.

The data centre is owned by Digital Realty – a leading global provider of data centre solutions which operates in more than 30 markets throughout Europe, North America, Asia and Australia.

“The investment is a clear vote of confidence in the economy of Western Sydney,” Mr O’Farrell said.

“Digital Realty estimates about 250 jobs were created by this investment – that is great news for people in Sydney’s west who want to work closer to where they live.”

“In March the Erskine Park Link Road is due to open which will provide a vital connection between the M7 and M4 motorways and the Western Sydney Employment Hub – which will eventually accommodate about 40,000 workers.

“Data centres like this facility at Erskine Park are an essential element of ICT infrastructure and play a critical role in supporting the cloud-based services and applications on which NSW’s significant services sector relies.”

“Our investment in this new facility demonstrates our commitment to becoming a leading provider of data centre solutions for Sydney-based customers, creating jobs and attracting global enterprises to NSW,” Mr Kumar said.

Earlier this month Digital Realty acquired a separate data centre in Sydney – a facility at Macquarie Park purchased for $11.75 million.