Japan has said it will scale down the number of whales it targets during the Pacific Ocean hunt starting next week, as well as limit next season’s Antarctic whaling to observation, after a United Nations court said Tokyo’s whaling in the Southern Ocean was a commercial activity disguised as science. 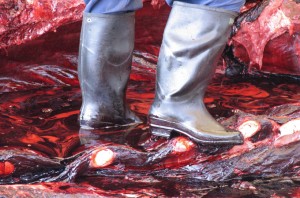 Fisheries Minister Yoshimasa Hayashi said on Friday that the Pacific catch target was being slashed to about 210 from the current 380.

The annual spring hunt along Japan’s northern coast is to begin next week.

Japan has exploited a loophole in a 1986 moratorium that allowed it to conduct lethal research on the mammals, but has openly admitted that their meat makes its way onto dinner tables.

Environmentalists have hailed last month’s ruling by the UN’s International Court of Justice.

Japan’s whaling program in the northern Pacific was not challenged in the ruling.

“We will carry out extensive studies in cooperation with ministries concerned to submit a new research programme by this autumn to the International Whaling Commission (IWC), reflecting the criteria laid out in the verdict,” Hayashi said.

A company engaged in traditional coastal whaling in northern Japan, and which also takes part in the research hunt, welcomed the news.

“If the research programme is discontinued, our company will no doubt go bankrupt this year,” Minoru Ito, president of Ayukawa Hogei, in the tsunami-hit city of Ishinomaki, told the AFP news agency by telephone.

The company has been catching Baird’s beaked whales, a species not covered by the moratorium, in coastal waters since the ban was imposed.

The ban has threatened to choke the port of Ayukawa which has depended on whaling since the mid-19th century.

It has also taken part in the research programme to hunt Minke whale.

“We can survive if the programme continues while we are recovering from the (2011 tsunami) disaster with borrowed money and government help,” Ito said.

Media had speculated that the start of the next Pacific hunt had been delayed from April 22 to 26 to avoid a clash with a visit by US President Barack Obama.

The mass-selling Yomiuri Shimbun said the delay appeared to be an effort to avoid overshadowing the visit with an activity widely denigrated in the West.

The US is a major voice in the IWC against hunting, but is also Tokyo’s chief ally in the global community.