Terrorists’ attacks, bomb blasts, target killings, more dead and more threats by Taliban. On the other hand more regrets and more condolences by the government and state’s functionaries. This is what 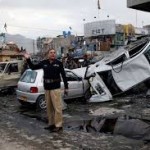 every day’s story in Pakistan. From Karachi to Peshawar, terrorist have shown their capacity and courage attacking security forces, policemen, religious leaders, journalists, children whoever is on their hit list. They are the same Taliban from the same tribes who were armed and trained by Americans and Pakistan to fight against Russian forces in 1980s in Afghanistan to save Afghanistan from Russians on the name of Jihad, now they are working destabilize Pakistan by the anti-Pakistan powers. Yesterday’s Jihadis today’s terrorists. It has been proved today that these tribal people have no principle. They are professional killers. They have wrong concepts of Islam. They are not the true followers of their religion but abusers. They are the paid-killers who can kill anyone for money & land and are being paid by anti-Pakistan powers.

The anti-Pakistan forces want to first destabilize Pakistan then declare Pakistan a failed state so that they can disarm Pakistan from its nuclear armament and then disintegrate into smaller states for their vested interest and they are using these Taliban as paid professional to do the job.

In the last 13 years, the people of Pakistan have seen all forms of terrorism, brutality and anti-state activities. These continuous terrorists’ attacks and killings are the part of their strategy, they want to create so much anarchy, fear, hatred and division in people that people believe that their forces are incapable to provide safety to them so that people welcome the foreign forces when they land; they have done this in Iraq and Afghanistan and they want to land in Pakistan now. That is why, they have attacked Mosques whether Shia’s mosque or Sunni’s mosque, temples, churches, residential buildings, hotels, public venues, schools, police stations and army centres. Many top religious, scholars, intellectuals, writers, journalists, professors, doctors, social workers, school children, tourists, politicians, parliamentarians, police officers, top rank army officers to ordinary policemen have been targeted and killed. Jails have been attacked where the most dangerous members of Taliban and Al-Qaida got freed. They have constantly and openly claimed responsibilities of their acts of terrorism so that the people surrender against them.

These anti-Pakistan international powers have well designed plan to destroy Pakistan. First, the powerful and stable government of General Pervez Musharraf was removed and Pervez Musharraf was forced to hand over power to the corrupt, dishonest and incapable political powers of Pakistan through a fraudulent democratic process. Musharraf was Pervez Musharraf was pushed to inaudibly leave the country and Benazir was welcomed into the country from her self-exile and then she was assassinated. Then the Pakistan’s governance handed over to the corrupt political system of Pakistan headed by the most corrupt and undeserved person. Asif Ali Zardari became the President of Pakistan with the support of all corrupt and self-centered oriented political elements. Zardari installed and flourished the crook political culture. All history-sheeters, powermongers and seasoned politicians back in game with the support and dictations of their foreign masters. In the 5 years of so-called democratic rule, they not only dragged the country towards economic disaster and corrupted all major institutions of Pakistan but they blackmailed Pakistan’s defense forces and intelligence services and weaken them. They purposely ignored the growing activities of Tehreek-e-Taliban in the country on the instructions of those foreign powers who brought them in power. The freed foreign agents who were found in terrorists activities and killing people like Ramond Davis through the corrupt justice system. No terrorist has been punished yet. They even could not punish the killers of Benazir Bhutto.

One political group enjoyed 5 years in power and then through the same fraudulent democratic process/elections handed over the power to waiting in line through the fake election process and give and take (mukmuka) drama. The new government of Nawaz Sharif is working on the same agenda of time-pass and enjoy as long as in power. It’s shame that he has hardly attended sessions of the parliaments, he has more foreign trips than local visits with his brother, cousins and his party friends.

The drama of dialogue with Taliban is going on for the last few months, time-wasting techniques are being used on the name of all parities conference, forming negotiation team, giving tribal leaders one more chance excreta excreta, and none of political leaders has clearly and firmly declare war against Taliban. On the other hand, Taliban has shown that they are determined and committed to kill as many as Pakistanis from Karachi to Peshawar and Quetta.

How come they don’t understand or don’t come-up with straight and firm action against Taliban who have killed more than 40,000 Pakistanis and turned the State into the most dangerous place to live. For what they are waiting for…. the thing is these crook and corrupt politicians have no power to launch war against Taliban because they are brought into the power by the same international powers who have very clear agenda for Pakistan’s future. These incapable politicians are just the tool for them.

Unfortunately, Pakistani nation is lacking with a true leader at this time. A leader who should be clear, firm, fearless, honest, and committed to save Pakistan from these terrorists without any ifs and buts. And the reality of Pakistan is that the only department which can save Pakistan from these terrorists is Pakistan Army but these crook politicians don’t want army to take over the country and punish all these terrorists. This is the reason they are determined to punish retired General Pervez Musharraf as an preemptive measure against next army rule.

Nevertheless, Pakistan Army doesn’t have to waste time anymore. They have to take over the country but not like in the past. They should not take over the rule for taking revenges, or to punish a particular political leader or party but to save the country and for to protect the people of Pakistan.