At least 16 dead and dozen others wounded in air strikes on Gaza Strip amid reports of possible ground offensive.

Israel’s intense bombardment of the Gaza Strip has killed at least 16 people and wounded dozens of others, Palestinian officials have said. 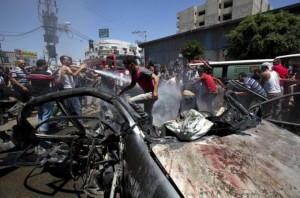 Israel on Tuesday stepped up what it said might become a long-term offensive against Hamas in the Palestinian enclave after a surge in rocket attacks on Israeli towns.

The Israeli Cabinet has authorised the calling up of 40,000 army reservists ahead of a possible ground offensive. At least 1,500 soldiers have already been deployed around the parameter of Gaza.

The renewed violence came a day after nine Palestinians were killed following more than 60 Israeli airstrikes struck the Gaza strip on Monday. Palestinian fighters launched more than 80 rockets that day.

Following the worst outbreak of violence along the Gaza frontier since an eight-day war in 2012, the Israeli military said a ground invasion was possible, though not imminent.

It urged citizens within a range of 40km of the coastal territory to stay close to bomb shelters.

“We are preparing for a battle against Hamas which will not end within a few days,” Defence Minister Moshe Yaalon said in a statement.

“We will not tolerate missiles being fired at Israeli towns and we are prepared to extend the operations with all means at our disposal in order to keep hitting Hamas.”

Of those killed on Tuesday, seven died in an air strike in the town of Khan Yunis, south of Gaza, Al Jazeera’s correspondent said. At least 25 were injured in that attack.

Palestinian medical officials said that at least four were killed in a drone strike that hit a vehicle in al-Wahda Street in the centre of Gaza.

Earlier on Tuesday, an air raid targeted site that belonging to Qassam Brigade, the military wing of Hamas movement, killing one person.

All options on table

Explosions echoed across the Gaza Strip on Tuesday, shaking buildings and sending smoke rising from targets hit by Israeli fire.

In residential areas, the sounds of crying children could be heard as ambulance sirens wailed. Some people took to rooftops to watch for Israeli aircraft and rockets streaking toward Israel.

A source in Prime Minister Benjamin Netanyahu’s office quoted the Israeli leader as saying: “The IDF (Israel Defence Forces) must be ready to go all the way. All options are on the table, including a ground invasion.”

The Israeli military said that in the past 24 hours, more than 100 rockets had been fired at its territory. Some were intercepted by the Iron Dome anti-missile system, but two people were wounded by shrapnel.

The Israel-Gaza border heated up last month after Israel’s arrest of hundreds of Hamas activists in the occupied West Bank, where three Israeli young settlers went missing on June 12.

The Israeli military said that more than 200 rockets have been launched at Israel from the Gaza Strip since Israel mounted the dragnet while searching for the teens, who were found dead last week.

Israel has accused Hamas fighters of killing them. In a suspected revenge attack, a Palestinian teen was abducted in East Jerusalem on Wednesday whose charred body was found in a forest. Six Israeli suspects have been arrested in connection with the case.