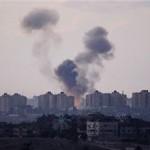 Khader al-Zahhar, a cameraman with al-Quds TV, had a leg amputated due to injuries sustained in the attack.
The Al-Shawa building, struck in the early hours, houses a number of media organizations, including Ma’an News Agency’s headquarters in the Gaza Strip.
A Ma’an correspondent said the impact was focused on the eleventh floor, where the office of al-Quds TV is located.
Six journalists were moderately injured, five of whom were identified as Darwish Bulbul, Ibrahim Labed, Muhammad al-Akhras and Hazem al-Daour, all al-Quds TV employees.
An Israeli army spokesman said forces targeted the antennae of the building. He said it was used by Hamas for carrying out terror activities.
A second Israeli airstrike around 7 a.m. hit a second media complex in Gaza City , the al-Shuruq building.
Sky News Arabia and Al-Arabiya reported that their offices have been affected.
There were no initial reports of injuries.
Witnesses said Israel’s aerial bombardment of Gaza continued with intensity overnight. Israeli shelling pummeled Beit Lahiya in northern Gaza, while fighter jets struck southern Gaza.