“That is what we were waiting for and what we pushed to do,” said Ibraheem Bahar al-Uloum, a Shia lawmaker from the National Alliance (NA), after nominating Ibadi. “We made our decision, and getting 127 votes to back our candidate within the NA is very good,” said al-Uloum. 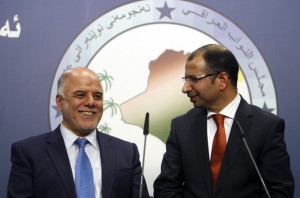 Under Iraq’s constitution, the biggest bloc in parliament has the right to form the government. Maliki, who headed the State of Law Coalition, which has held 94 seats following elections held in May, said his coalition has the most MPs.

His Shia rivals, however, said the National Alliance (NA), which consists of several large Shia parties, is the largest bloc with 170 seats.

Ibrahim al-Jaafari, the head of the NA, presented a document to the president on Monday nominating the bloc’s candidate to the top post. It was signed by al-Ibadi, and Hussein al-Shahristani, Maliki’s deputy for oil and power, backing claims that NA is the biggest bloc.

The document said Ibadi heads the Daawa bloc within the State of Law Coalition, totalling 38 seats out of 94, while Shahristani heads a bloc of 14 independent MPs. Al-Ibadi has 30 days starting from Monday to form his cabinet.

Maliki’s former allies within the State of Law coalition said the move was expected after increasingly strong hints from Ali al-Sistani, the most influential Shia cleric in the world, that Maliki should step down. “We will never ever stand against the will of the marjayia [religious authority], so we are strongly supporting this change,” said a prominent Daawa party leader, who spoke to  on condition of anonymity.

“This is a compromise solution for us because we do not want to lose the post of prime minister or our people. Maliki is our brother and he is well respected by us, but this post is for Daawa and now it’s still within Daawa,” the leader said.

Thirty-eight Daawa MPs who defected on Monday said their decisions aimed to save the unity of Shia parties, which they argued would be divided if Maliki insists that he is the sole candidate for the post.

Maliki said he would file a legal complaint against the president for nominating Ibadi, and accused him of violating the Iraqi constitution “for the sake of political gains”.

“What happened was a constitutional violation and conspiracy and a dangerous precedent,” said Aboud al-Essawi, a State of Law member and adviser to Maliki. Essawi accused Masoum of naming Ibadi to replace Maliki under foreign and Kurdish pressure. “The Kurdish, American and Iranian fingers are clear in what happened today,”

Iraq’s Sunni blocs, who are strongly opposed to Maliki, expressed their satisfaction at Ibadi’s nomination. “We are backing this nomination. What happened today was a big change,” said Mohammed Iqbal, a senior Sunni lawmaker.

“We are blessed to nominate Ibadi. He is well-educated, efficient and has good relations with everyone, and there is no negative points registered against him with regard to his political history,”

Meanwhile, Iraqi Kurds, who are fighting Islamic State group fighters who have advanced towards Erbil, capital of the Kurdish region, over the last two weeks, said that they were not opposed to Ibadi.

Kurdish leaders added, however, that Ibadi must fix persisting problems between the Kurdish region and the central government, particularly arrangements over oil and gas revenues and the annual budget.

“We have no objections against Ibadi or anyone else who would be nominated by [the National Alliance], but for sure we will negotiate to be sure that our demands are included in his governmental programme,” said Eraze Abdullah, a lawmaker for the Patriotic Union of Kurdistan (PUK) party.

Hayder al-Khoei, an Iraq analyst at Chatham House, warned that the struggle for power in Baghdad is far from over.

“Don’t rule out Maliki yet. Politically he is finished, but he still controls elite security forces and a vast network inside the security and intelligence apparatus. If he wants to cause trouble, he can,” al-Khoei said.

“Furthermore, even though the Americans, the [European Union] and the [United Nations] have come out with statements supporting Ibadi, Iran is the key actor because it is the most powerful external player in Iraq. They’ve been very quiet. They made crystal clear that the unity of the Shia bloc was a red line for them. Today it was crossed, and it remains to be seen how they will respond.”