While a majority in Iraq’s Kurdish region supports US army intervention, critics say it could lead to greater conflict.

Erbil, Iraq – Kurdish officials in Iraq have demanded that the US sustain and expand its aerial bombing campaign in order to help them stave off advances made by the Islamic State group.

Over the past week, the Kurdish military forces known as Peshmerga have conceded control of a large swath of territory to Islamic State fighters stretching from the western Syrian border to 50km from the capital of Iraq’s Kurdish region, Erbil. 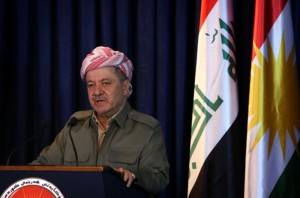 On Saturday, the US ordered air strikes on Islamic State targets near Erbil. Since then, US military aircraft have carried out several bombings around Makhmour, Gwer, and Sinjar, near Iraq’s border with Syria.

“For the air strikes to be really fruitful in a way that can somewhat turn the tide of the conflict, they need to continue long enough,” said Dler Mustafa Hassan, deputy chairman of the committee of Peshmerga affairs in the Kurdish parliament.

“In addition, for the situation to change and IS to be fought effectively, the US needs to go beyond limited air strikes,” said Hassan, a former Peshmerga brigadier general. “They need to help arm and train the Peshmerga so we can defend ourselves in the future, as well.”

As the seat of the Kurdish Regional Government (KRG) and home to over a dozen consulates and diplomatic offices, Erbil is strategically vital to Iraq’s Kurdish population. The Islamic State group’s incursion into Makhmour and Gwer, 50km southwest of Erbil, has raised concern among Kurds about further Islamic State advances.

Iraq’s Kurdish leaders view the US as an ally, and many in the KRG have expressed support for US involvement. “The US operations also [have] a humanitarian aspect, and the US officials clearly pointed out that they [are working] to prevent a genocide,” said Salam Abdulqadir, an international relations lecturer at the University of Human Development in Sulaimaniya.

He was referring to thousands of members of Iraq’s Yazidi religious minority that the Islamic State had trapped and surrounded on Sinjar mountain. Kurdish forces said they rescued more than 5,000 Yazidis from the area. “However, there is a political message, too, which is to the Kurds’ advantage: The Kurds will not be left alone if they are attacked in the future,” Abdulqadir added.

But some in the region are not certain that the US will provide protection to Kurds in other areas of Iraq. “Is this just an attempt to save Erbil or part of a broader campaign to defeat [the Islamic State]?” asked Hassan, the Kurdish MP.

Hassan added that the US should extend its aerial cover to include areas near the Kirkuk and Diyala provinces. Both areas are highly disputed, as both the KRG and Iraq’s central government in Baghdad claim them as their own.

But US military action has also raised some opposition in Baghdad. “It is fine to provide humanitarian assistance [in Sinjar]. It’s a humanitarian duty,” said Iraqi MP Zainab al-Sahlani, from the al-Ahrar Bloc, explaining that she rejects US military assistance to Kurdish forces, and that such support falls outside a 2008 framework agreement between Baghdad and Washington that includes security provisions.

“The US has to provide further military assistance to the Iraqi army per agreements between the two sides to assist with the fight against terrorist groups,” al-Sahlani said.

Rozh Ahmed, a Kurdish journalist, also cautioned against US involvement. “Western intervention will further increase the [Islamic State fighters’] attacks against civilian Kurds, as it would give [them] the excuse to come from all over the world to fight in Kurdistan,” Ahmed said.

“This would turn Kurdistan into a battleground for proxy wars, the heavy price of which will be paid by the precious lives of innocent civilians.”

Amid the intensifying fight against the Islamic State group, Kurdish officials have repeatedly complained that they are ill-equipped to take on the group.

“We have a border of roughly 1,035km with the Islamic State…They have now shifted their focus to Erbil,” said Fuad Hussein, chief of staff for KRG President Massoud Barzani, during a press conference on Friday. “The [Islamic State] has been bringing fighters from Syria towards Mosul and Erbil.”

Kurdish Peshmerga forces retook Gwer on Sunday morning, and are now in control of most parts of Makhmour, a source familiar with the Peshmerga operation told media on condition of anonymity.

“The bombardments by US aircraft have had an impact,” said Ghazi Qadir, the head of the local Kurdistan Democratic Party (KDP) office, which is in power in Gwer. The KDP is the main party in the Kurdish government.

Qadir has been involved in fighting in the area, along with hundreds of other local volunteers who have taken up arms across the Kurdish region to protect their towns and villages against Islamic State advances.

Kurdish forces from the neighbouring countries of Syria, Turkey, and Iran have also joined the fighting; Syrian Kurdish Peoples’ Protection Units (YPG) forces and fighters affiliated with the Kurdistan Workers’ party Party (PKK) have played a major role in areas such as Sinjar and Makhmour.

“US assistance on the ground is very important to us. It needs to continue as we gradually push forward ,” Qadir said.

Last week, a sense of panic spread in Erbil that an advance by Islamic State fighters was imminent. Some residents fled the city. But American involvement in the fighting changed that.

“This was necessary. Islamic State is a brutal force and the whole world should fight it,” said local shopkeeper Mohammed Nazim, 41. “I can definitely see people feeling good about the situation.”

American involvement may also embolden Kurds in their disputes with  Baghdad over issues such as the extent of their autonomy and control of oil resources. “Kurds will find themselves in a more powerful position following the US assistance and will feel supported,” said Abdulqadir, the university lecturer.

Kurdish volunteers and Peshmerga troops are currently fighting on nearly a dozen fronts, including Rabia, Sinjar, and Zummar, near the Syrian border; Khazir and Bashika, northwest of Erbil; Jalawla and Qaratapa, in the northern part of Diyala province; and Hawija, west of Kirkuk.

Elsewhere, Kurdish forces have pulled out from several towns, including Telkeyf, Hamdaniya, Bashiqa, and Bartalla, in the flat plains of Nineveh province.

“We are not fighting a terrorist organisation, we are fighting a terrorist state,” the Kurdish region’s President Massoud Barzani told Laurent Fabius, France’s foreign minister, during a press conference in Erbil on Sunday. Barzani went on to call on Western states to provide Kurdish forces with more weapons.