Saleh al-Mutlak, one of top Sunni officials, comes under attack as gunmen dressed as soldiers open fire on his convoy. 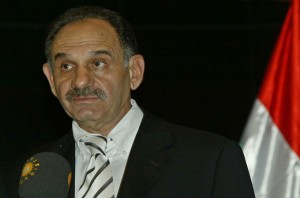 Iraq’s Deputy Prime Minister Saleh al-Mutlak has survived an assassination attempt in the Abu Ghraib area west of Baghdad, after gunmen dressed as soldiers attacked his convoy, killed a guard and wounded at least five people.

Friday’s attack on one of the country’s most senior Sunni Arab politicians comes less than three weeks before a contentious parliamentary election, the first since US troops left the country, which will be a major test for security forces.

“Mr Mutlak is safe and was not hurt,” an assistant to the deputy premier, who was travelling in the convoy, told the AFP news agency.

The identity of the attackers was not immediately clear.

While an interior ministry official said only that gunmen attacked the convoy, Mutlak’s assistant specifically blamed the army.

“We were the target of an assassination attempt by the army who opened fire on us, and the bodyguards responded in the same way,” the assistant said, without elaborating.

There is widespread anger among Iraq’s Sunni Arab minority, which complains of being marginalised and mistreated by the Shia-led government and security forces.

The attack comes ahead of an April 30 general election, which Mutlak’s list is contesting.

UN Iraq envoy Nickolay Mladenov has warned that campaigning for the election “will be highly divisive”.

“Everyone is ratcheting it up to the maximum, and you could see this even before officially the campaign started,” Mladenov told AFP.

“I would hope that it would be more about issues, and how the country deals with its challenges, but at this point it’s a lot about personality attacks,” he said.

Political analyst and parliamentary candidate Tareq al-Maamuri has said that “violence will increase during the election campaign, as well as the settling of accounts”.

“Since the beginning of the political process in Iraq, the electoral competition [has been] a dishonest competition,” he said.

The election will be held against the backdrop of rampant violence that kills hundreds of people each month, a long-deadlocked legislature and severely lacking basic services.

While security forces were able to keep violence to a minimum during last year’s provincial polls, they have failed to bring a subsequent year-long surge in unrest under control.

Shelling in the city of Fallujah, just a short drive from Baghdad, killed three children and wounded three others on Friday, a doctor and a tribal leader said, according to AFP.

In a sign of both the reach of anti-government fighters and the weakness of security forces, all of Fallujah and shifting parts of Anbar provincial capital Ramadi, to its west, have been out of government control since early January.