Nouri al-Maliki says only court decision can force him out as US sends more military personnel to violence-hit nation.

Iraq’s Prime Minister Nouri al-Maliki has said that it will take a federal court ruling for him to leave power, defying the president’s decision to task a rival with forming the next government. 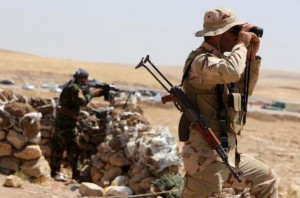 In his weekly televised address, Maliki on Wednesday said the appointment of Haider al-Abadi to replace him as prime minister was a “violation” of the constitution and “had no value”.

“I confirm that the government will continue and there will not be a replacement for it without a decision from the federal court,” Maliki said.

Maliki used his weekly address to justify why he is clinging to power.

“He says he needs to respect the vote of the people, and we have to remember that his party secured the most seats in parliament but not enough to have an outright majority,” she said.

The pronouncement comes as the UN said the world needed to do more for Iraqi civilians fleeing fighters from the Islamic State group.

Reporter, reporting from Bad-git Kandala Camp near the Iraq-Syria border, said members of the minority Yazidi group who had escaped with their lives still did not feel safe.

“They are demanding to be taken out of Iraq, they are saying there is absolutely no chance they can feel safe anywhere any more,” our correspondent said.

“There is not enough of anything. A lot of the aid has come from local people because the government and aid agencies are overwhelmed. It comes from trying to launch an aid effort in the middle of a conflict zone.”

Maliki appears increasingly isolated, said correspondent Khodr, and US President Barack Obama has said he weclomes the nomination of al-Abadi.

The US has sent another 130 US military personnel to Iraq on what the Pentagon described as a temporary mission to assess the scope of the humanitarian crisis facing thousands of displaced Iraqi civilians trapped on Sinjar Mountain.

Chuck Hagel, the US defence secretary announced the deployment saying that “this is not a combat boots on the ground kind of operation”.

Another defence official, speaking on condition of anonymity, said the extra troops were Marines and special operations forces whose mission was to assess the situation in the Sinjar area and to develop additional humanitarian assistance options beyond current US efforts there.

The 130 troops, who are in addition to 250 US military advisers already in Baghdad and Erbil, arrived on Tuesday in the city of Erbil, well east of Sinjar.

They are to work with representatives of the State Department and the US Agency for International Development to prevent potential acts of genocide by the fighters of the so called Islamic State who forced them from their villages, the defence official said.

In a separate development, the European Union failed on Tuesday to agree on a joint position on supplying weapons to Iraqi Kurds battling the IS, but has said individual members could send arms in coordination with Baghdad.

Masoud Barzani, the Iraqi Kurdish president, asked the international community on Sunday to provide the Kurds with weapons to help them fight the Islamic State group, whose dramatic push through the north has startled world powers.

“The [ambassadors] noted the urgent request by the Kurdish regional authorities to certain member states for military support and underlined the need to consider this request in close coordination with the Iraqi authorities,” a spokesman for Catherine Ashton, the EU foreign policy chief, said.

Diplomats said some EU states opposed sending arms, meaning there was no EU-wide agreement to do so, but that they could not prevent other countries from doing so, if they wished.