Fighting in Iraq has caused a dramatic drop in trade with neighbouring Jordan, as the shared border is ‘partially’ shut.

Amman, Jordan – As violence escalates in Iraq, neighbouring Jordan is facing a dire economic situation. Trade between the two countries, once a pillar of the Jordanian economy, has dropped dramatically.

“The situation is disastrous, as our exports have almost stopped,” said Nabeel Rumman, president of the Association of Investors in the Free Zone. Jordanian and foreign investors are not taxed in Jordan’s free zones to encourage trade. 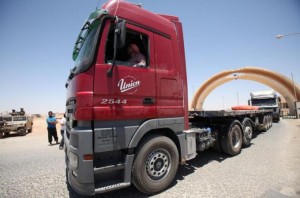 Through the free zones, companies were exporting $120m worth of cars and other goods each month to Iraq, according to Rumman, who estimated that the group’s monthly losses total approximately $78m. “Only a few investors have shipped basic things like food and medicine [to Iraq] during the past couple of months,”.

Iraq previously imported 20 percent of Jordan’s total exports, and in 2013, exports from Jordan to Iraq totalled approximately $1.25bn, according to the Jordan Chamber of Industry (JCI).

Although trade first declined between Jordan and Iraq after fighting erupted between Iraqi government forces and Sunni tribes in Anbar province in December 2013, the situation has worsened since armed groups seized the Iraqi border crossing with Jordan in June, leading to a “partial” closure of the border.

“The number of trucks crossing to Iraq has gradually dropped from a minimum of 500 per day, to only 25 per day since December 2013,” said Mohammad al-Daoud, president and spokesperson of the Jordanian Drivers’ Association.

“Those who cross are individual truck drivers, but shipping companies no longer allow their drivers or trucks inside Iraq,” said Daoud, explaining that fighting between Iraqi government forces and fighters from the Islamic State group have raised concerns that trucks may be held hostage or robbed.

Before the slowdown in traffic, approximately 2,000 trucks were dedicated to the exchange of goods between Jordan and Iraq, Daoud said, and the original route took drivers through the Karama-Tribil border crossing and along the desert highway to Anbar province.

Today, 1,900 of these trucks have changed their routes. They now cross from Jordan to Iraq through Gulf countries, like Saudi Arabia and Kuwait, or are solely operating locally, Daoud said. “Security is an issue here; there are so many militias and armed groups fighting there, so we do not know with whom to negotiate if a driver is kidnapped,” he said.

These dangers have caused transportation costs to increase. Rumman estimated that the trip from Jordan to Iraq – which has increased from 400 km to 2,500km each way – is now four times more expensive and has made “the two-day trip last two weeks”.

Jordan’s economy has faced several economic hardships over the past few years, as tourist numbers have dropped and the country is struggling with a severe energy crisis. A large influx of Syrian refugees – now totalling about 609,000 people, and spread across refugee camps and Jordanian urban centres – has also put a strain on the country’s resources.

Earlier this month, Prime Minister Abdullah Ensour told journalists at a press conference that Jordan’s economic situation had “become miserable”. Jordan’s ministry of industry and trade and the finance ministry did not respond to repeated Al Jazeera requests for comment.

Meanwhile, an even larger challenge for Jordan is the noticeable drop in oil imports from Iraq, which have also been affected by the unrest. According to the JCI, oil imports from Iraq declined from $194m in January-May 2013, to $4m for the same period this year. “Jordan’s biggest economic concern lies in the decline of imports of oil … and it needs to look for alternatives,” said Jordanian economist Jawad Annani.

Jordan’s industrial sector contributes 20 percent of the national income, according to a study by the JCI, and provides “thousands of job opportunities to locals”. According to Mahrooq, companies may cut jobs as a way to reduce costs. This would worsen unemployment, which already stands at 12 percent and has triggered waves of protests across Jordan.

“Jordan has a modest economy,” said law and economic analyst Ghassan Mu’mmar, “and that is why it is always relied on neighbouring countries for its exports.”