Gunmen from the Islamic State of Iraq take city and launch attacks on Kirkuk and Samarra, a day after the fall of Mosul.

The Iraqi city of Tikrit has been seized by fighters from the Islamic State of Iraq and the Levant, security sources have said, the second city to fall to the group in two days. 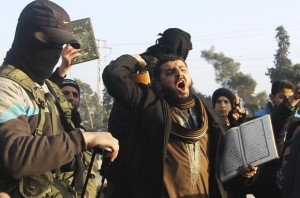 Sources told Agencies on Wednesday that gunmen had set up checkpoints around Tikrit, which lies between the capital Baghdad and Mosul, Iraq’s second largest city which was captured by ISIL on Tuesday.

“All of Tikrit is in the hands of the militants,” a police colonel told the AFP news agency. A police brigadier general told AFP that fighters attacked from the north, west and south of the city, and that they were from ISIL.

A police major told the agency that the militants had freed about 300 inmates from a prison in the city, which is the capital of Salaheddin province.

Meanwhile, sources said the nearby city of Kirkuk, home to Iraq’s biggest oil refinery, was also being attacked by ISIL. Fighters had guaranteed the safety of Iraqi soldiers if they gave up their weapons.

In Samarra, south of Tikrit, witnesses told AFP that fighters had arrived in trucks mounted with machineguns, while a policeman said his unit was involved in fighting at the northwest entrance the city.

The fighting comes after half a million people are reported to have fled Mosul since the city was taken over by ISIL on Tuesday.

The Geneva-based International Organisation for Migration said the Mosul takeover had “displaced over 500,000 people in and around the city”, a quarter of the city’s population.

The Turkish government also said that ISIL had stormed its consulate in Mosul, taking staff and the consul captive.

Al Jazeera’s Imran Khan, reporting from Baghdad on Wednesday, said aid agencies were under pressure to deliver humanitarian aid as nobody had expected Mosul to fall quite so dramatically.

Earlier in the day, ISIL advanced into the oil-refinery town of Baiji before Iraq’s Fourth Armoured Divison forced the group to retreat.

The group had threatened local police and soldiers not to challenge them and warned the town’s most prominent tribal leaders to lay down their weapons.

“We are coming to die or control Baiji, so we advise you to ask your sons in the police and army to lay down their weapons.”

And in Sadr City, northern Baghdad, a suicide bomber detonated explosives inside a tent where local Shia leaders were meeting, killing at least 15 people and wounding at least 34 others.