Iran is negotiating with the United States as part of a “constructive engagement” with the world community and wants Washington to back up its words with actions, President Hassan Rouhani said on Thursday. Speaking at the World Economic Forum in Davos, the pragmatic 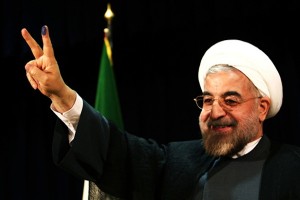 president who took office last August also said relations with Europe were being normalised now that an interim nuclear accord was being implemented. Addressing about 2,500 global business and political leaders, he invited European companies, especially major energy groups, to seize economic opportunities in Iran. “The Islamic Republic of Iran is prepared to engage in constructive cooperation for promoting global energy security, drawing on its vast oil and gas resources,” he said. Underscoring that pitch, he held a private meeting with oil and gas executives at a hotel in the Swiss resort before his speech. A deal with six major powers including the United States to restrict Iran’s nuclear programme in exchange for a partial easing of economic sanctions came into force this week. However, most sanctions, including a severe squeeze on access to the international financial system, remain in force and the United States has stressed Western companies should not regard Iran as “open for business”. Rouhani promised to pursue a foreign policy of “prudence and moderation” to revive the battered economy.