World Kabaddi League boasts prize-money worth $165,800 and will take place across four continents from June.

Organisers of a new kabaddi league have taken a hands-on approach at dragging the quaint, indigenous game into the professional era by launching an IPL-style franchise-based competitions. 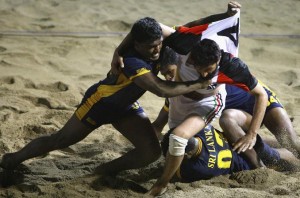 Kabaddi, a mixture of team tag and wrestling, is the latest to attempt a formal structure and roughly 100 players will enter an auction early next month.

The league, boasting prize-money worth INR10m ($165,800), is set for inauguration in mid-June in New Delhi with matches taking place across four continents.

Rakesh Kumar, who captained India to the 2010 Asian Games gold in Guangzhou, reckons the new league is precisely what the game needs to advance towards professionalism.

“We may not become household names overnight but there would be more money and more visibility for sure,” Kumar, a ticket inspector with Indian Railways, employers of the largest number of kabaddi players, said.

“Kabaddi is only shown on television when we win gold at the Asian Games and sporadically during the nationals but now we have a confirmed, quality broadcaster for the league, public interest is bound to rise.”

Revolving around very basic skills, the game is played by two teams of seven, in which a ‘raider’ enters the other half of the court to tag or wrestle opponents before returning ‘home’ while holding his breath and chanting ‘kabaddi, kabaddi’.

“We’ve tried to model the league along the lines of F1 as a touring sports property and it will travel to 14 cities around the world,” Raman Raheja, World Kabaddi League CEO, said.

“Each city will host at least one weekend where all the 10 international teams will compete. Each season will be spread across a five months with matches being played on weekends.”