Indonesian police have used tear gas and water cannon to break up a rally by supporters of the ex-general who lost last month’s presidential election, as a court was set to uphold his opponent’s victory. 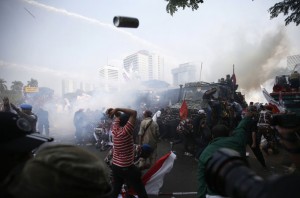 As judges at the Constitutional Court started reading the lengthy verdict to Prabowo Subianto’s challenge of an election won by Joko Widodo, which could take several hours, police responded to a rowdy crowd of his supporters with force.

Officers fired multiple volleys of tear gas and water cannon into the crowd, which was several hundred strong, after they earlier threw rocks and attempted to push past lines of riot police guarding the road to the court, which was closed off, reported the AFP news agency.

Some police chased supporters away and hit them with batons. It lasted only a few minutes and the crowd dispersed afterwards. An AFP reporter at the scene said one unconscious protester was carried into an ambulance.

Dalianto, a 57-year-old protester who like many Indonesians goes by one name, earlier said that he was showing his support for Prabowo as he was the “true president”.

Both Prabowo, a top military figure in the era of dictator Suharto with a chequered human rights record, and Widodo, the reform-minded governor of Jakarta, declared victory at the July 9 election.

But official results released after a two-week count across the vast archipelago showed Widodo won a decisive, six-point victory after the hardest-fought, most polarizing election since authoritarian rule ended in 1998.

The 53-year-old, who won legions of fans with his down-to-earth approach as Jakarta governor and is known by his nickname Jokowi, is the country’s first leader from outside the political and military elites.

Reporter, reporting from Jakarta, said that the stage is set for more clashes there.

“There’s a very small but very hardline group of supporters who came here to cause trouble and provoke violence and that’s exactly what they’re doing right now,” she said.

She added that the group had set out with bad intentions, while there are also a lot of genuine Prabowo supporters, including women and children, who have taken to the streets.

Prabowo, who has been seeking the presidency for a decade, has refused to accept the results and his team filed a lengthy complaint against the election commission with the Constitutional Court, which has the final say on poll disputes.

His team say fraud occurred at tens of thousands of polling stations, and that election officials failed to order recounts in numerous places where they should have. But evidence presented by Prabowo’s team has not been regarded as convincing.

Legal challenges were mounted after Indonesia’s two previous direct presidential elections, in 2004 and 2009, and both failed.

Security was tight for the announcement, with around 4,000 police on duty at the court, where Prabowo supporters have been staging peaceful rallies for the past fortnight.

Another 30,000 security personnel, including soldiers and police, were deployed around the capital, while a total of 250,000 police were on duty across the vast archipelago.