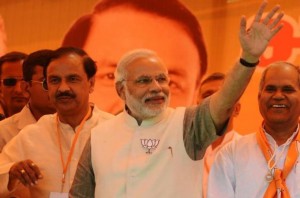 “People gave ruling Congress 60 years, I just need 60 months to prove that the BJP is the best option for India,” Modi told a huge gathering in Gurgaon, a bustling satellite city about 30km south-west of the capital, New Delhi, on Thursday.

The BJP prime ministerial candidate is hailed for turning his western Gujarat state, where he has been chief minister since 2001, into an economic powerhouse.

He was here in support of his party candidate, Rao Inderjit Singh, a sitting Member of Parliament from Congress party who switched sides before the polls.

Modi, the frontrunner in this election according many opinion polls, is seen as a divisive politician for his handling of the 2002 Gujarat riots that left more than 1,000 dead, mostly Muslims.

He was cleared by a local court of any wrongdoings, but a member of his cabinet was convicted to life sentence for her involvement in one of the deadliest riots in recent decades.

In a blog post last year, the BJP leader wrote that the killings had “shaken and shattered” him “to the core”, but he has refused to offer an apology to the Muslim community.

“They have divided the people of India, they want to divide the soldiers now,” he said at the rally where thousands turned up wearing face masks amid strong din of pro-Modi slogans.

Amid tight security, Modi exhorted people at the rally to vote for the BJP to make sure that the party bagged 300 seats.

“We don’t want to form a weak government. Weak governments don’t deliver,” he said in a remark about a coalition government that will be formed in case of a hung parliament, which many believe could be the outcome of Apil-May polls.

Earlier, AAP’s Yadav attacked Modi for playing what he termed as “divisive and communal politics”.

“Why is BJP silent on Gujarat massacre. Why doesn’t it apologise,” Yadav told a gathering in Ghasera village, in Muslim dominated Mewat region.

Yadav blamed media and corporates’ “nexus” for projecting Modi as India’s future prime minister which he said was “contrary to the ground realities”.

The AAP, which banks on anti-corruption plank, is contesting 400 of the total 543 seats up for grabs and many of its candidates are facing top BJP and Congress leaders.

Yadav, formerly a psephologist, said the main competitor to the AAP was the BJP and not the Congress.

“We are often told why we target the BJP only in our speeches,” he said adding, “Well let me explain it. Congress is not even in the race. It is not even in the league so talking about it is useless,” he told to the applauding crowd of hundreds who wore white Nehruvian caps and waved long brooms – the AAP’s election symbol.

The AAP on Thursday released its manifesto for the elections that underscores party’s aim to crush corruption and decentralisation of power.

Launching the manifesto, Arvind Kejriwal, the AAP leader, said the party would fight against the culture of “bribe-taking”.

“AAP believes in long-term approach of decentralisation and devolution of power which would give people of Kashmir the ability to make decision for their own development,” Kejriwal said.