New Delhi: Narendera Modi, the 63-year-old son of a low-caste tea seller tainted by anti-Muslim violence in his home 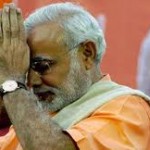 state of Gujarat in 2002, wrote on Twitter that “India has won. Good days are coming.” . Commonly known as anti-Muslims fanatic will be now the Prime Minister of world’s largest democracy. Bharatiya Janata Party (BJP) and its hardline leader Narendra Modi is on now track for the first parliamentary majority by a single party in 30 years. The BJP declared “the start of a new era” in the world’s biggest democracy as the ruling Congress conceded defeat in elections that exposed anger about sickly economic growth and rampant corruption. Firecrackers exploded at BJP offices around the country and sweets were handed out in celebrations that began only a few hours after the first figures filtered out.

This is the beginning of change, a people’s revolution and the start of a new era, senior BJP leader Prakash Javadekar at party headquarters in New Delhi.

As the news are coming, BJP is winning more than the 272 seats required for a majority on its own in the 543-seat parliament, with victories by its allies taking it easily in excess of 300.

The Congress party, the national secular force that has run India for all but 13 years since independence, was set to crash to its worst ever result after a decade in power. Senior Congress leader Rajeev Shukla said, “we accept defeat. We are ready to sit in the opposition,”. According to the news, Congress managed to secure only 49 seats. The disastrous showing for Congress is another blow to the scion of the Gandhi dynasty, 43-year-old Rahul, whose first performance as chief campaigner will likely lead to acrimonious fallout.A group of Congress supporters shouted slogans in support of Rahul’s more popular sister Priyanka outside party headquarters on yesterday (Friday).

Modi is known as anti-Muslims politicians who is accused of turning a blind eye to religious riots in 2002. Yet he is popular India as rising star of elevating Economy in his State of Gujarat.  After a presidential-style campaign built around him and his record during 13 years running Gujarat, expectations are sky-high of what Modi will deliver in a chaotic and still poor country that is home to a sixth of humanity.

Modi’s promises to revive the flagging economy have won him corporate cheerleaders, while his rags-to-riches story and reputation as a clean and efficient administrator satisfy many Indians’ desire for strong leadership. He is a 3 times elected chief minister in his home state of Gujarat. He has anti-Us and anti-Europe policy and boycotted by the US and European powers for a decade over the 2002 riots in Gujarat that left around 1,000 people, mostly Muslims, dead. He denies that he turned a blind eye to the bloodshed and his focus on the campaign trail has been jobs. His party, BJP manifesto includes a pledge to build a temple to honour the Hindu god Ram at the site of a former mosque in northern India, a religious flashpoint that sparked deadly rioting in 1992.