NEW DELHI: India’s Supreme Court on Wednesday rejected an appeal by an Indian tycoon accused of a multibillion dollar fraud to be released from jail and allowed house arrest.

Subrata Roy, head of the Sahara India conglomerate has been jailed since March 4 on charges that his company failed to return billions of dollars to investors. 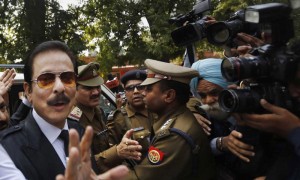 Bail was earlier set at $1.68 billion and the company has struggled to raise the funds.

India’s securities regulator has accused Sahara India of raising nearly 200 billion rupees ($3.2 billion) through bonds that were later found to be illegal.

The court allowed the Sahara group to sell properties in nine Indian cities after the company said it had not succeeded in raising the $1.68 billion needed to obtain bail for Roy.

The court had earlier rejected a proposal by the company to pay bail in instalments.

The court also permitted Sahara to use its bank deposits and bonds to raise bail but ordered that the money be deposited in an account maintained by the capital markets regulator.