Shia group Anjuman-e-Haideri claims it already has 25,000 volunteers and floats tender for flights to Baghdad.

A top Shia group in India has called for thousands of volunteers to travel to Iraq to fight “terrorism” by the Islamic State in Iraq and the Levant (ISIL) rebels, “protect Shia shrines” and “look after” the wounded, the group members told news media.

Thousands of Muslims have already registered for the mission which the Shia organisation Anjuman-e-Haideri is spearheading.

The group has also floated a tender inviting India’s aviation industry to carry the thousands of volunteers to Baghdad in a short period starting from August. 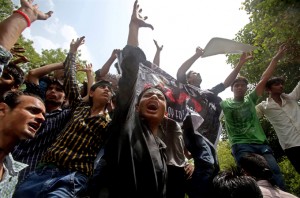 “So far 25,000 people have volunteered for the Iraq mission. And we expect special rates from the aviation industry. Let us see what response our tender fetches us,” President of Anjuman-e-Haideri (New Delhi chapter), Ali Naqvi told media on Tuesday.

He said the volunteers were funding their journeys to Iraq and those unable to assemble money “will be funded by the organisation”.

The group members said the effort was not sectarian and rebels killing “innocent” civilians in Iraq needed to be stopped.

“We will go to Iraq come what may to defend our holy shrines, protect civilians from the ISIL brutes and treat the wounded. This is purely a humanitarian effort. The volunteers include Shias and Sunnis both. They are doctors, engineers and civil servants,” chief patron of Anjuman-e-Haideri, M Ali Mirza said.

He said the group would send more than 100,000 volunteers to Iraq to fight ISIL’s “terrorism” which, he said, could reach India too.

“As Indians we are against terrorism and we will fight it,” he said.

The move comes as India struggles to salvage the release of 40 workers believed to be under Sunni rebels’ captivity.

“This is sheer nonsense. It’s a foolish effort. It’s a bunch of nuts planning this journey. I don’t think India will ever allow them to reach Iraq. There won’t be visas or passports for them. Will they go on horseback?”.

Officials of India’s Foreign Ministry were not immediately available to comment on whether the volunteers would be allowed to travel to Iraq.

About 10,000 Indian nationals work in Iraq, mostly in areas not hit by the fighting between the Sunni rebels and the national army.

But officials estimate some 100 Indian workers besides 46 nurses in Tikrit are trapped in contested areas.

Earlier on Monday, Indian officials said they planned to bring back 600 citizens from Iraq and that the country’s diplomats were visiting Indian workers to warn them that Iraq was unsafe.

“We have sent mobile teams to Baghdad, Najaf, Karbala and Basra. These teams are advising Indians that they leave their places of work and return to India,” an Indian Foreign Ministry spokesman, Syed Akbaruddin, said.

“India’s diplomats are meeting workers and telling them that the advisory is to leave Iraq.”

Over what attempts  were being made to seek the freedom of 40 hostages, he said: “We’re ready to knock at any door. We are knocking on front doors, back doors and on track doors.”