MUMBAI: A stricken Indian submarine docked in Mumbai Thursday, allowing investigators to begin probing a fire which is feared to have killed two sailors and forced the navy chief to quit. 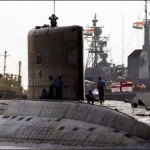 Seven other crew members were airlifted to hospital with breathing problems after Wednesday´s accident, which came only six months after another deadly submarine disaster in Mumbai.

Admiral D.K. Joshi, the chief of naval staff, announced Wednesday night he was standing down to take “moral responsibility” for the accident on board the Russian-built INS Sindhuratna during a training exercise. Naval spokesman Captain D.K. Sharma told that the submarine had docked in Mumbai on Thursday morning, which would allow the navy to step up its search for the two sailors who are still unaccounted for.

“The aim is to ventilate the submarine, locate the two missing officers, establish the cause of all incidents and to recommend steps for continuing safe operations of submarines,” added an emailed statement from the navy.

Last August, 18 sailors were killed when the fully-armed submarine INS Sindhurakshak exploded in flames and sank in a military shipyard in Mumbai.

The disaster was thought to be the Indian Navy´s worst since the sinking of a frigate by a Pakistani submarine during a war with its neighbour in 1971.Various other naval accidents reported in recent months included a submarine running aground in Mumbai´s harbour, fires on a minesweeping vessel and an aircraft carrier, and a collision with a fishing vessel.

Defence Minister A.K. Antony told reporters on Thursday that Joshi was “pretty much disturbed about the whole development”.

“He requested me to take his resignation with immediate effects,” Antony added.

While a full inquiry is expected to determine the exact cause of the accident, the navy said it appeared to have been due to sparks in a sleeping cabin.

According to the Press Trust of India (PTI) news agency, smoke filled a compartment and triggered the emergency closure of hatches which isolate sections of the submarine.

The missing pair “might have been left in the cabin or at some other place as various cabins and compartments are isolated as part of the emergency measures”, PTI quoted an unnamed navy officer as saying.