Two teenage girls have been found dead, hanging from a tree in a northern Indian village after they were gang-raped by five men, police said on Thursday. 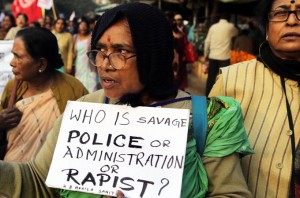 A post-mortem report indicated that the cousins from the low-caste Dalit community, aged 14 and 15, hanged themselves late on Tuesday after the attack in a village in the Budaun district of Uttar Pradesh state.

“The report suggests ante-mortem hanging, which means the girls probably committed suicide. But we will take into account all aspects before coming to a conclusion,” Atul Saxena, Budaun’s police chief, told the AFP news agency.

The two Dalit girls were found hanging from a tree on Wednesday night in their village after they went missing the night before, according to Saxena.

e said the arrests were made after villagers blocked the main highway near Katra village to protest against alleged police apathy and inaction. Senior Uttar Pradesh government officials ordered the arrests.

Saxena said that the head of Katra’s police station had been suspended for not acting immediately when the girls’ family complained they were missing.

The National Commission for Women, a women’s rights group that operates throughout the country, has reportedly sent a team to investigate the incident, according to local media.

India tightened its anti-rape laws last year after nationwide protests over a crime considered rampant in the country.

Records show a rape is committed every 22 minutes across the country of 1.2 billion people, though activists say that number is low because many victims are reluctant to come forward.