India’s lower castes suffer as tradition of clearing human waste continues despite parliament passing a law against it.

New Delhi, India – Rajni was only 10 when her mother told her that she would spend her life picking up human excrement from dry latrines. They belong to the Valmiki caste, regarded as the lowest among the Dalits – formerly India’s untouchables. 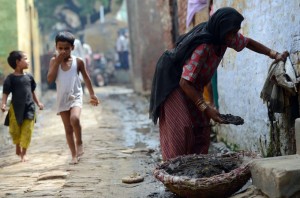 “She said that we are born to do this. First, we clean the waste of others and then we get to eat,” Rajni recalls her mother saying.

Now 21, Rajni remembers how sick she felt for most of her childhood; the stink emanating from the excrement; and the flies that followed her when she carried the waste in a basket fetched from the households in her village in the northern state of Uttar Pradesh.

“The worst days were when it rained. The waste would drip onto your neck and shoulders,” she told Al Jazeera. “You wanted to keep throwing up.”

Rajni was married as a teenager and continued to be a manual scavenger in her husband’s village until 2012 when Sulabh International, a non- profit organisation, replaced the dry latrines in her village with flush toilets.

But unlike Rajni, thousands of others are still forced to clean the human waste across India despite parliament passing a stringent law against manual scavenging last year.

In its report on manual scavenging released on Monday, Human Rights Watch, said that despite the ban on the handling of human excrement, members of the lowest rungs of the Dalit caste are being coerced into doing this work in rural and urban India.

Consequences of trying to quit range from physical violence to expulsion from public life, the global rights watchdog said.

The Prohibition of Employment as Manual Scavengers and the Rehabilitation Act 2013 prescribes a prison term for one year or a fine of $826 (50,000 rupees) for engaging manual scavengers and offences under the Bill are cognisable and non-bailable.

The law has provisions for rehabilitation of manual scavengers by providing them training for an alternative livelihood, financial assistance to buy a house or plot of land, subsidy and concessional loans and scholarships for their children.

In India, the practise of manual scavenging has been called the worst form of caste discrimination against Dalits – both Hindus and Muslims – who have been shunned as “untouchables” for centuries.

An overwhelming majority of manual scavengers are women, according to the UN. They are still inextricably linked to cleaning human excrement.

Baleshwari, 25, who was engaged in manual scavenging until 2012, told media that she was not allowed to enter any house and food would be dropped into her hands from a distance.

While they were treated as “untouchables”, Baleshwari said that people would tell them not to miss a single day or to send a replacement.

“If you missed a day then the load of waste would become very heavy and worms would come out it,” she said. “It was hell.”

Manual scavenging, which also involves stepping into drains and septic tanks, is also a health hazard. The lack of private toilets has been identified as a grave safety risk for women who must find isolated spots to relieve themselves.

The law requires local authorities to construct community flush toilets within nine months of its enactment. It also requires private citizens to demolish their dry latrines.

In his Independence Day speech on August 15, Indian Prime Minister Narendra Modi announced the “Clean India” campaign to have separate toilets for girls in every school within one year. But rights activists say the state governments need to enforce the legislation at the grassroots.

Modi’s emphasis on toilets has brought the issue of sanitation to the forefront, but now New Delhi has to ensure that state governments enforced the legislation on manual scavenging at the grassroots, Meenakshi Ganguly, the South Asia director of Human Rights Watch.

“The discrimination is so ingrained that people feel that they can bypass the law without getting into trouble,” she said. “The state and the police do not intervene.”

Ganguly said that local officials and village councils (Panchayats), who receive funds from the federal government for a range of welfare schemes, should be held accountable.

There is no official data on the total number of manual scavengers in India, while the 2011 census data shows that an estimated 2.6 million dry latrines are used in India.

“Every state government and the Centre keep appearing before the Supreme Court to claim total eradication of manual scavenging. But the truth is, there are still two to three lakh (200,000 to 300,000) families in the country who continue to work as manual scavengers,” former federal minister for rural development, Jairam Ramesh, said in 2012.

Last week, the government said that 11,000 manual scavengers have been identified in 23 states since the new law was enacted and the survey is going on.

Activists pointed out that successive governments had failed to implement the previous law on manual scavenging enacted in 1993, which prohibited the construction of dry latrines and made the employment of manual scavenging punishable by one year in prison.

While the old law viewed manual scavenging as a sanitation problem, activists say the new law deals with the handling of human excrement as a violation of human dignity. But it has been criticised for allowing the manual cleaning of sewers and septic tanks if employees are fitted with protective gear and safety equipment.

Some activists, who are wary that the adequate gear won’t be provided, want a total ban on manual scavenging.

Ashif Shaikh, a social activist based in central Indian state of Madhya Pradesh, said that the Indian Railways is the biggest source of manual scavenging. He pointed out that most toilets on trains are holes from which human excrement falls on the tracks.

“Someone has to pick it up,” he said. “We all use trains and so we need to put social pressure on the railways to get modern toilets.”

Despite Modi’s fervent call to build more toilets, activists are concerned that the problem of manual scavenging could become worse if mass migration outpaces the sanitation infrastructure.

Jitendra Rathod, who heads Jan Vikas, a non-profit based in western Ahmedabad city, said that 10 to 20 flush toilets service slums of 2,000 to 3,000 people in the capital city of Gujarat.

His organisation has identified more than 100 spots in the city where manual scavengers clean human excrement from open defecation.

Rathod said that arresting the problem required a three-step solution – constructing enough toilets for everyone, proper drainage systems and a steady supply of water.

The activist said that his organisation had unsuccessfully attempted to file complaints against manual scavenging at several police stations.

“Some policemen don’t know about the new law and others are afraid to move against the city officials since some of them are senior,” he said.

Activists say that rehabilitation in communities where manual scavenging was driven by both necessity and centuries-old social prejudices is an enormous challenge.

Bindeshwar Pathak, head of Sulabh International, which has set up over one million toilets in India since 1970, said that rehabilitation requires a sustained effort to change the mindset of people as well as manual scavengers.

“You can’t pass a circular or a law and think that people will start eating together and untouchability will be over,” he said.

Two years ago, Sonam, 18, used to leave her house with a basket and spade every morning to clean human excrement in a village on the outskirts of New Delhi. Her grandmother and her mother did the same.

Now all three of them head to a training center run by Sulabh International, where they study English, maths and Hindi for the first part of the day and take vocational training courses in the afternoon.

“My grandmother’s life has changed after 40 years of picking up waste,” said Sonam.