India’s Prime Minister-elect, Narendra Modi, has been performing religious rituals in the Hindu holy city of Varanasi after his election landslide. 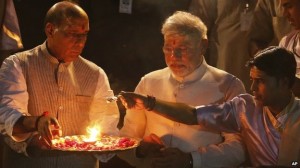 Mr Modi offered prayers on the banks of the river Ganges after being greeted by jubilant supporters.

Mr Modi, 63, also promised to clean up the Ganges, considered a sacred river by Hindus.

He was elected to parliament from Varanasi as well as from another seat in his home state of Gujarat.

Earlier he held a victory procession in the capital, Delhi.

Narendra Modi secured the most decisive election victory in India in three decades, campaigning on promises to revive the economy. He is expected to be sworn in next week.

Manmohan Singh, whose Congress party was crushed in the poll, has tendered his resignation as prime minister.

Results show the BJP gained a majority in parliament and will be able to govern without coalition partners.

However, many Indians still have profound concerns over Mr Modi because of claims he did little to stop communal riots in Gujarat in 2002 in which at least 1,000 people died, most of them Muslims.

Mr Modi, chief minister of Gujarat, has always denied the allegations and was never charged.

After arriving in Delhi from his home state, Mr Modi was greeted by flag-waving supporters. He stepped out of his car, flashing a victory sign.

A brass band, drummers and bagpipers met him at the BJP headquarters, while bunting and balloons decorated the street.

The BJP has won 282 seats – more than the 272 seats needed for a parliamentary majority.

Speaking at BJP headquarters, Mr Modi said: “I want to bow, I want to give my thanks… to the people of India.”

He said Indian media had created “consciousness among voters” and a “great festival of Indian democracy”.

On Friday, Mr Modi wrote in a widely-shared tweet: “India has won, good days are about to come.”

He also told supporters he would rule for all Indians.

“The age of divisive politics has ended – from today onwards the politics of uniting people will begin.”

World leaders, including US President Barack Obama and UK Prime Minister David Cameron, have congratulated Mr Modi on his victory.

India’s new leader has received invitations to Washington and London. Previously, the US had denied him visas and the UK cut off all ties with him following the 2002 riots.

The Congress party, which has dominated Indian politics since independence, is only expected to win 44 seats.

Congress has been mired in serious corruption scandals and its leadership has been considered ineffective in recent years, analysts say.

Manmohan Singh met the president to hand in his resignation.

In a televised farewell address earlier on Saturday, Mr Singh said the government had achieved a lot in the past 10 years. “I wish the incoming government every success,” he said.