At least four civilians, two from each Asian nation, killed in new border clashes as tension rises between two rivals.

India has accused Pakistani troops of firing guns and mortar rounds on at least three villages in the India-administered Kashmir, killing at least two members of one family, while Pakistan has said that two of its civilians were killed in “unprovoked” India fire. 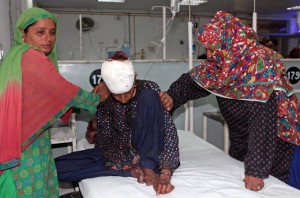 Dharmendra Pareek, a top official of India’s paramilitary force, said that the firing early on Saturday was unprovoked, adding that one Indian border guard and three civilians were also injured in the incident, the AP news agency reported.

“The firing started around midnight. Twenty-two posts and several civilian villages were targeted so we retaliated in equal measure. Several houses have been damaged. Firing is still on in some areas,” he was quoted by NDTV as saying.

Pakistani officials said the latest incident occurred in Sialkot region, which faces the south of the India-administered Kashmir and where another civilian was killed by Indian firing last month.

“Today Indian Border Security Forces (BSF) again resorted to unprovoked firing in Chaprar and Harpal sectors on the working boundary near Sialkot. Two civilians including a woman and a 60-year-old man were martyred due to BSF firing,” a senior military official told AFP news agency.

“Intermittent exchange of fire is still continuing at this moment,” the official said.

India and Pakistan often accuse each other of violating a 2003 ceasefire agreement.

In the past two weeks, incidents of ceasefire violation have been reported almost every day, with more than 70 reports since Indian Prime Minister Narendra Modi took charge in May, NDTV reported.

Kashmir is divided between India and Pakistan, and the two neighboring countries claim the disputed Himalayan region in its entirety.

Fighters have been frequently attacking security bases in Kashmir since the 1990s, when there was a full-blown insurgency against Indian rule in a region over which India and Pakistan fought two of their three wars.

The Himalayan region is one of the world’s most militarized zones, with India deploying more than 1.3 million troops to quell the rebellion that triggered off in 1989.