You’re going to want to use every share button at the bottom of this article once you’re done reading, so get ready, it’s time to freak out:  Maybe. 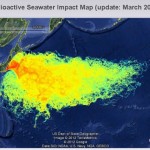 If you live on the west coast of Canada or the United States, you’re pretty much already screwed at this point thanks to the Japanese earthquake and tsunami of 2011.  Radiation levels are already increasing in the food and water, babies born with thyroid issues linked to radiation are rising quickly and governments in Canada and the United States are raising the “acceptable levels” of certain toxic substances in the food being shipped in from Japan.

his isn’t a conspiracy theory, this is happening and it’s happening right now.

The fancy little picture at the top of the article isn’t showing you the flow of happy fun time thoughts from Japan back in March of 2012, it’s showing you the flow of radiation from the Fukushima nuclear plant after the devastating earthquake and tsunami of 2011.  Yes, that sharp pain you just felt in your chest is the sudden realization that the image shows the radiation reaching almost past Hawaii more than a year ago.

Do the math – If that radiation screamed across the Pacific Ocean that far in one year, just how far do you think it has gotten since then?  Look at what World Truth TV is saying and then you decide.

Samples of milk taken across the United States have shown radiation at levels 2000 percent higher than EPA maximums.  The reason that milk is so significant is that it is representative of the entire food supply.  According to an article published on Natural News, “Cows consume grass and are exposed to the same elements as food crops and water supplies. In other words, when cows’ milk starts testing positive for high levels of radioactive elements, this is indicative of radioactive contamination of the entire food supply.”

The  Food and Drug  Administration and the Environmental Deception Protection Agency, instead of refusing to prohibit the sale of tainted foods and mandatory testing of foods produced and harvested from the Pacific Coast, have simply raised the “acceptable levels”  of radioactive material in foods.

If that doesn’t scare the ever-living crap out of you, then take a look at the list of foods you are now supposed to be wary of, you know, for only the next 30,000 years.

How can we protect ourselves? First, be aware of what items are likely to be highly tainted.

1.)  SEAFOOD:  Question the origin of ALL seafood.  Fish and crustaceans from the Pacific Ocean should all be considered to be poisoned with radiation.

2.)  WATER:  The rainfall and snowfall are all radiated.  Do not drink any water that has not been filtered.   The tap water that flows from your faucet has NOT been treated to rid it of radioactive particles. A recent report from the NY Times stated, “A rooftop water monitoring program managed by UC Berkeley’s Department of Nuclear Engineering detected substantial spikes in rain-borne iodine-131 during torrential downpours …

3.) DAIRY PRODUCTS:  Milk and milk products from the West Coast states currently have the highest levels of radiation in North America.

4.)  PRODUCE:  Leafy Vegetables, Wines, Tomatoes, Strawberries….all produce from California or any other West Coast State are also likely to be tainted.

5.)  MEAT:  If an animal eats any leafy vegetable all along the West Coast, that animal has consumed radiation, and is poisoned.  This is any animal from cows, pigs, goats, sheep to wild deer and other game.

If you eat the above foods from areas with high radiation levels, you are eating radiation and feeding it to your children. Slowly the radiation levels within your body will build up.  This is PERMANENT.

Infant mortality rates across the United States have increased by more than 35% since the nuclear disaster, according to a court statement by Dr. Sherman with independent scientist Leuren Moret, MA, PhD.  A study published in The International Journal of Medicine indicates that more than 20,000 deaths right here in North America can be directly attributed to the release of radioactive material from Fukushima.

Radioactive isotopes of the type released from Fukushima have a half-life of 30,000 years.  This means that we must permanently change the way we prepare our food.

I don’t know about the rest of you, but that one way trip to colonize Mars is looking pretty damn attractive right now.